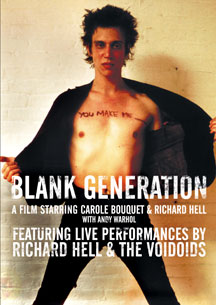 Johny Lydon (née Rotten) used to end Sex Pistols concerts by sneering this question to the crowd: “Ever feel like you’ve been cheated?”

You might, if you spend eighty minutes watching the 1980 film Blank Generation, starring Richard Hell. One individual who’s in a position to have authority on the subject calls Blank Generation a “misbegotten” enterprise, and describes director Uli Lommel as an opportunistic, talentless hack of the lowest order.

The film starts future French superstar Carole Bouquet; she’s quite stunningly beautiful (and the film is beautifully shot) but she’s as wooden as a cigar store Indian. There’s virtually no chemistry between her and any of the film’s other actors. In fact, only two onscreen actors come off well in the film. Andy Warhol — who’s billed prominently in the feature despite being onscreen for a mere three-minute scene — “comports himself well” in the words of that aforementioned authority. Punk musician (and non-actor) Richard Hell, as the star of the film, actually exudes more realism, more authenticity, than all of the other players combined.

What’s amusing is that the authority to whom I’ve referred is none other than Hell himself. The DVD release of this pretentious claptrap of a film includes as its bonus material an up-close conversation with Hell, in which he relates his horrible experience of being associated with this monstrosity of a motion picture.

But wait! His disarming and candid demeanor is quite entertaining to behold as he mercilessly deconstructs the film, picking apart scenes as “stupid” and pointing out (correctly) that the film is completely disjointed, artificial, and full of scenes that represent little more than ideas (as opposed to fully-thought out story lines). More than once he marvels at a clip from the film, commenting, “What the f**k was that?”

One central scene in the film revolves around Hell’s character Billy riding in his car with Bouquet’s Nada (heavy-handed symbolism in the naming, much?) toward the beach. They argue whether or not to go, and ultimately don’t decide. In the commentary Hell observes that this lack of being able to decide whether to go to the beach, well, that’s how Lommel tells us viewers that Billy and Nada are “blank.” What is meant to be heavy and revelatory is instead silly and laughable.

The thing is, because Hell is discussing this particular film, viewers must see the movie to follow and fully appreciate what he’s talking about. “Part of my shame is that my name is among the screenwriters,” Hell admits wryly in the 2009 interview. So while the Hell interview is well worth seeing, the price of admission is: watching the damn film first.

All that said, Blank Generation is not without its redeeming features (but it is, in Hell’s words, “irredeemable” overall). As he points out, it’s well shot (but badly edited). It does present some real shots of 1978 NYC (though they’re couched in ludicrous dialogue and action). And the film does capture Hell onstage at CBGBs with his band the Voidoids (featuring ace guitarist Robert Quine, drummer Marc Bell [later known as Marky Ramone] and guitarist Ivan Julian). Though even that is botched by the director: the song “Blank Generation” is heard in its entirety more than four times.

See the film so you can appreciate Hell’s interview. Truly, that interview is reason enough to buy this DVD.