Home  »  review   »   Album Review: The Apples in Stereo – Travellers in Space and Time

Album Review: The Apples in Stereo – Travellers in Space and Time 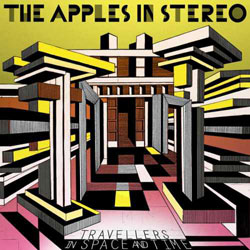 It would be too easy to dismiss The Apples in Stereo simply as sonic tricksters, as, fun trick noisemakers, so to speak. Or to peg them as retro-revivalists. But that would sell them short. On Travellers in Space and Time the group certainly trades in pop confections, but they’re delivered with heart and muscle. And, with a wink. The backing vocals on “Dream About the Future” are creamy, vocoder-y goodness a la Electric Light Orchestra. But all of the seeming gimmicks are in service of the songs. Though they purvey a vibe that often approaches early 70s AM pop (think: the Archies), the Apples in Stereo are as likely to evoke thoughts of artists as diverse as Sweet, Vince Guaraldi, 10cc and Mountain. No, really.

Few other groups could put forth the early-disco aesthetic of “Hey Elevator” and make it appeal to rock fans. Impossibly catchy hooks abound throughout the sixteen tracks. The dual guitar solo on “Hey Elevator” manages to conjure images of Thin Lizzy and kazoos at the same time.

Even a gimmicky vocoder-only track like the brief “Strange Solar System” works in this context. Imagine an ultra-poppy take on Todd Rundgren‘s “Born to Synthesize.” The aptly-named “Dance Floor” will have even the most dance-phobic listener bobbing. Robert Schneider‘s slightly twee vocals might be off-putting to listeners weaned on David Lee Roth and those Metallica guys, but then said listeners might have wandered into this review by mistake.

The analog synth riff that stakes out “C.P.U.” is horribly and intentionally out of tune, recreating the notoriously unreliable oscillators built into 80s era Moog synthesizers. (Trust me: I had one.) If the Human League had a punk attitude akin to, say, the Music Machine, this is what they would have sounded like. “No One in the World” is built on a Something/Anything era styled piano riff, but with a pie-eyed happy vibe more akin to the Captain and Tennille.

“Dignified Dignitary” is a musical citation of The Move‘s (rather than ELO’s) “Do Ya?” and features cowbell right off a Grand Funk LP. But the chirpy backing vocals and watery synthesizer solo keep the song from heading into heavy-rock territory; the song’s attitude is closer to Material Issue.

The swirling pop of “No Vacation” features a bed of what sounds like cellos with a propulsive bass line. Heavily chorused guitars, electric harpsichord triplets and a melodic piano solo all come together to make the song another in a long line of pop winners.

“Told You Once” is ABBA-meets-Mott the Hoople. This reviewer is running out of words to get across the point that the music on Travellers in Space and Time is infectious, bubbly, and just plain fun. “It’s All Right” heads for a 15 Big Ones aesthetic and makes it work.

“Next Year at About the Same Time” rocks harder, sort of across between the Moody Blues and the Raspberries. Here the precious vocal delivery is dialed back. “Floating in Space” presents a minimalist take on the sort of sounds one would usually expect from the Flaming Lips. “Nobody But You” throws Los Bravos‘ “Black is Black,” ELO’s “Showdown” and Motown disco into a blender. The result sounds like a forgotten hit from 1977.

A Wurlitzer electric piano holds “Wings Away” together. The melody has that the-end-of-the-album-is nearly-upon-us feel. Vocoders, Mellotrons and other vintage keyboards abound. The album ends with “Time Pilot,” featuring a found-sound recording. That’s fitting, as the use of spoken recordings from odd sources bookends the album. One of the speakers predicts that “you will use this record often,” and he’s probably right.

Overall, the songs on Travellers in Space and Time present a skewed and original take on 70s pop. On one hand, it’s not too difficult to imagine this band appearing as guests on Sonny and Cher or one of the 70s era variety shows. But if one scratches the musical surface, it’s clear that The Apples in Stereo are far too weirdly wonderful and unique for that sort of mainstream acceptance.