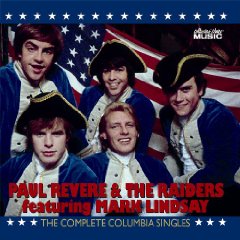 On the back-cover liner notes of the 1967 album The Spirit of ’67 by Paul Revere and the Raiders, publicist and bon vivant Derek Taylor wrote these prophetic words: “They are very good. And they are also very successful. Which is not always the same thing.”

Knowingly or not Taylor (former press agent for no less than the Beatles) was putting forth an argument that wouldn’t really to begin taking hold until decades later. The Raiders were very, very good. But their high visibility — five days a week from June 1965 until March ’67 on Where the Action Is!, then as hosts of the weekly Happening ’68 and the daily It’s Happening — was a double-edged sword.

True, the fact that the group appeared on TV in their pseudo-revolutionary garb, smiling and cutting up (before the Monkees, mind you) did help bring their music to a wider audience than would have otherwise caught on, but that visual image would ultimately work against them as the sixties progressed. Listeners wanted more “serious” music, and though Paul Revere and the Raiders could (and very, very often did) deliver, somehow the group has never gotten its critical due.

Paul Revere and the Raiders were a hard-working, show-stopping touring band. While they recorded songs from outside composers (usual suspects of high quality such as Boyce-Hart etc.) they also wrote the lion’s share of their best songs themselves. In fact those songs — many credited to the team of Mark Lindsay (vocals, sax) and Terry Melcher (production) — rank among the best rock music of the sixties, period.

I could go on. And in fact, I will. But not today. I’ve had the pleasure of speaking at length with Mark Lindsay, as well as with Phil “Fang” Volk (bassist during the group’s ’65-’67 apex), group manager/historian Roger Hart and others. All of this will culminate in a feature, coming soon.

Meanwhile, there’s the music. Collectors’ Choice Music has released a 3cd set called The Complete Columbia Singles. This 66-track set (mostly in monaural, a la the original 45rpm discs) includes every a- and b-side waxed by the group during their time on Columbia (1963-1975; the nine or so pre-Columbia sides are not included). Taken strictly as music, this set is of extremely high quality; it will make the listener nostalgic for the era even if he or she didn’t experience it the first time ’round.

From the early cuts that showcased the group’s tough Pacific Northwest R&B sound (led by Revere‘s boogie-woogie piano and Lindsay’s gritty saxophone) it’s clear that the Raiders were (among other qualities) excellent interpreters of the work of others. Like most groups of the day, the group’s b-sides found them reproducing their live performances on cuts like the instrumental standard “Night Train” and Richard Berry‘s “Have Love Will Travel” (also recorded by the Raiders’ regional colleagues The Sonics). And while the question as to who recorded Berry’s “Louie, Louie” first — Paul Revere and the Raiders or the Kingsmen — may never be settled to everyone’s satisfaction, the Raiders’ stomping, honking version is here.

By 1965 Paul Revere and the Raiders had made the move to Los Angeles, and begun two fruitful associations: on TV with Dick Clark, and in the studio with Terry Melcher, then flying high on the strength of his production work for the Byrds. Thus began the hit singles (and hit albums) era for which the group is most remembered. Absent a singles compilation such as this new one, it’s easy to forget just how many hit singles (and damn good rocking ones at that) the group had during this era. Beginning in late 1965, the string began with the proto-punk “Steppin’ Out” and continued with “Just Like Me,” “Kicks,” “Hungry,” “The Great Airplane Strike,” “Good Thing,” “Ups and Downs,” “Him or Me — What’s It Gonna Be?,” “I Had a Dream,” “Peace of Mind,” “Too Much Talk,” “Don’t Take it So Hard,” “Cinderella Sunshine,” “Mr. Sun, Mr. Moon” and 1969’s return to form, “Let Me.” Wow, just…wow.

By the end of that stunning run in 1969, Melcher was gone, Lindsay had assumed virtual control of the group in the studio, and three members of the “classic era” lineup had left (Bassist Volk, drummer Mike “Smitty” Smith and guitarist Drake Levin formed the musically successful but commercially stillborn Brotherhood, but that too is a story for another day, as is the ultra-rare Stockhausen– and Cage-influenced album they and friends released as Friend Sound. Stay tuned.)

The b-sides of those early singles were often off-the-cuff instrumentals, and for good reason: the band wanted deejays to be clear on which was the “plug side.” Yet within these b-sides — some of which showed up on the long players, some not — listeners can find some interesting music. In fact, much of it is so good, listeners unfamiliar with which-was-the-hit will find their enjoyment doesn’t ebb and flow between the a- and b-sides. B-side highlights from that early era include disc one’s “B.F.D.R.F Blues” and the aforementioned “Have Love, Will Travel” as well as one of the rare examples of a composing credit by a Raider not named Lindsay or Revere, Phil “Fang” Volk’s excellent “In My Community.” That song — according to reliable sources — was briefly considered for a-side status.

And while Lindsay’s “Undecided Man,” the b-side of the smash “Good Thing” could be slagged as an “Eleanor Rigby” ripoff, use of that epithet would be a crime: the song features a strutting string section and a mannered (in a good way) vocal from Lindsay. It, too, is a very, very good thing.

Lesser-known but fascinating tracks on the second disc — covering 1967-69 — include the heavy rocker “Rain, Sleet, Snow” from the rare and oft-maligned A Christmas Present…and Past album. That track features a catchy fuzz guitar riff and treated vocals, and deserves to be revived every Holiday season along with the Kinks‘ “Father Christmas.”

Due to its comprehensive nature, the set isn’t all wonderful, and listeners are likely to spend less time spinning the third disc than the previous two. Yet the disc covering the latter part of 1969 through 1975 (the group actually recorded into the mid-seventies) contains a number of gems.

The surprise hit “Indian Reservation (The Lament of the Cherokee Reservation Indian)” is here, and — although the song (a) wasn’t originally intended as a Raiders cut at all, but rather a Mark Lindsay solo number, and (b) sounds not a bit like the band that recorded “Him or Me — What’s It Gonna Be” because it wasn’t — it’s still an enjoyable, essential cut. Forgotten gems on the disc include the band’s 1969 remake of their 1967 song “Gone Movin’ On,” the semi-hit “Just Seventeen” from the oft-overlooked Collage LP, “Country Wine” and the “Mississippi Queen” rewrite “Powder Blue Mercedes Queen.” Latter-day Raider Keith Allison took a larger hand in composing with the group, and the results — while (again) not sounding much like earlier group — are impressive and memorable.

It’s only near the very end of disc 3 that things take a turn toward the dreadful. The discofied “Love Music” (from 1973) did actually chart, so some people liked it, but it’s safe to assume those people weren’t fans of “Kicks” or “Hungry” (or “Louie, Louie,” for that matter). Late-late period singles didn’t even feature Mark Lindsay, who had finally left to pursue his solo career full time. “Your Love (Is the Only Love)” featured some other guy singing, some other guys writing, and could have been any group…except Paul Revere and the Raiders.

But three or four minor, late-period missteps do not a less-than-perfect 3cd set make. The Complete Columbia Singles is a (nearly) career-spanning look at the singles output of one of America’s finest — and most criminally underrated — rock and roll bands. Highly recommended to anyone who’s a fan of rock music in general, and of the sixties variants in particular, The Complete Columbia Singles is an essential addition to the collection of any serious music fan.

Keep an eye out for my feature on the band, coming soon.