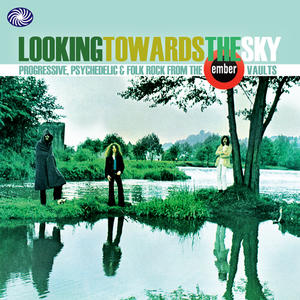 Ember was a tiny, independent British label based in England. Primarily oriented toward singles, the label’s forays into album rock were limited. But during that incredibly fertile period of the late sixties and early 70s, Ember released some fascinating — and rarely-heard — music. A new compilation collects some of the best of that material. The title is long but sums up what’s contained therein: Looking Toward the Sky: Progressive, Psychedelic and Folk Rock from the Ember Vaults. Unlike some barrel-scraping compilations, this set is filled to the brim with fascinating, high quality music.

Inveterate, incurable cratediggers will recognize a (very) few of the artists spotlighted on Looking Towards the Sky, but that’s all. Hardcore psych collectors may be familiar with the internet discussion group U-SPACES (this writer subscribed back in the 90s and continues to this day). That group has made as part of its mission the collecting of “un-comped” tracks of the era, with a special focus on non-album tracks. To date, dozens of unofficial volumes have been compiled, and the quality level is surprisingly high, giving weight to the theory that there were well over ten thousand garage bands in the 60s, and that most of them had at least one very good original song in them.

But with Looking Towards the Sky, the compilers have limited themselves to the output of a single label. Has that resulted in a dip in quality? Not at all. This eclectic collection might not offer something for everyone, but it provides something — and lots of it — for fans of particular styles, and does so in astounding audio fidelity. (And that’s no mean feat: owing to the scarcity of master tapes, some of these tracks are sourced from vinyl.)

Surprisingly, Looking Towards the Sky features more than a few American acts. Apparently these bands couldn’t get a stateside deal. We’re lucky Ember ponied up.

The disc kicks off with the first of two 1972 cuts from an act called 9.30 Fly. “Life and Times” features a delivery that evokes Fairport Convention crossed with It’s a Beautiful Day. While the song’s arrangement could benefit from a bit of tightening, there are enough tasty licks and hooks to result in a memorable tune. Nimble yet forceful drumming is a hallmark of the track.

The Dorians‘ “Help for My Waiting” from 1969 is a highlight of the disc. No less than three distinct guitars (lead fuzz, trilling acoustic and kazoo-distorto lead fill) propel the song, and they’re only the beginning. Hooks abound, and simple-yet-tasty organ washes are sprinkled across the track. The Ontario band’s vocalist has an impressive range. Perhaps more than any other track on Looking Towards the Sky, “”Help for my Waiting” sounds like it could have been a hit.

Blonde on Blonde‘s “Heart Without a Home” from 1970 kicks off with a guitar imitating a jews harp. A drum pattern vaguely reminiscent of Norman Greenbaum‘s “Spirit in the Sky” pushes the song forward. Echo-chamber vocals and droning guitars give the track a slightly otherworldly feel, a vibe consistent with much of Blonde on Blonde’s other work (this is the one act with which this reviewer was previously familiar). A heavily psychedelic guitar solo is the cherry on top of this delight.

Blue Beard‘s “Losing You” channels Iron Butterfly, but those of you who are thinking of “In-a-gadda-da-vida,” forget it. What we have here is a speedy tune with intricate playing, more on the order of “Unconscious Power.” Vacuum tone lead guitar, dueling licks between bass and wah-wah guitar, stop-start drumming and an infectious hook all come together to make a great tune. Previously unreleased, “Losing You” was part of an aborted album project from 1971.

Rusty Harness‘ “Goodbye” dates from 1970, but listeners will be forgiven for placing its release closer to 1966. A garage rocker replete with insistent Farfisa licks, hand claps and shouted chorus, “Goodbye” is a lost garage classic worth of revival.

“Doin’ the Best I Can” is a high quality folk-rocking 1970 b-side from an Irish group called Paddy Maguire. Except for the vocals, this could be a lost track from Procol Harum, albeit with a more pronounced gospel feel similar to early works from The Band. The liner notes allege the involvement of one Steve Winwood, and that sure does sound like him on organ.

A group calling itself Knocker Jungle is featured next, with “I Don’t Know Why” from 1970. The liner notes compare the track to early (folk-era) Tyrannosaurus Rex, and the involvement of Fairport Convention’s rhythm section on the track makes it more than it would otherwise be. The single’s b-side “Reality” follows; the song sounds like a hippy’s idea of what you’d get if you crossed early Traffic with Muswell Hillbillies-era Kinks. Not bad.

Blonde on Blonde’s “Sad Song for an Easy Lady” starts out sounding like James Taylor, but quickly gives way to something delightfully unexpected. Aggressive harmonica, punchy bass and distorted fuzz guitar come together to answer the question “what would a psychedelic-progressive campfire singalong sound like?” Amazing, really. The bass sounds like a cello; perhaps it was played with a bow?

The opening salvo of “Mr 509” from 9.30 Fly sounds like nothing so much as Love Sculpture, but — being progressive rock — makes a quick left turn into something more subtle and beautiful. A bass figure provides the song’s hook, and heavily Leslie’d guitar licks support the dreamy vocals. A bracing midsection sounds straight out of “Lay Down” from the Strawbs. (Note that “Lay Down” was released in 1972, the same year as this track.) The song is stuffed to the brim with ideas; in some ways it’s similar to The Who‘s “A Quick One (While He’s Away)” in its successful incorporation of several musical ideas. A tasty guitar solo rewards listeners who (as they should) hang on towards the end.

The Dorians’ lilting “Good Love” stakes out a vibe closer to West Coast rock, melding it with vocals reminiscent of the Association. It couldn’t be more different than “Help for My Waiting” (track #2 on this set) from a mere two years earlier).

Davey Payne and the Medium Wave give the set its title. The 1969 “Looking Toward the Sky” feature prominent horn charts, but rocks nonetheless. (A frequent argument on the U-SPACES list concerns the merits — or lack thereof — of “horn rock”.) A busy bass line and tasteful strings are successfully incorporated into the brief track.

Blonde on Blonde is represented by a third cut on Looking Towards the Sky: “Circles” (not the Who song). With an eclectic vibe, the song sounds like “Paint It, Black” -era Stones, Love Sculpture (again) and the Open Mind all at once, but Blonde on Blonde manages to combine all those styles into something lighter and more progressive all at once. Imagine a technically precise Keith Moon and you’ll have some sense of what the drumming is like on this tune. An impossibly distorted guitar solo sends thing irretrievably (and wonderfully) into acid-rock territory. The song does go on a bit longer than perhaps it ought, but it doesn’t wear out its welcome.

“This Ain’t the Road” was a 1969 single from Back Street Band. Sounding quite a bit like Honeybus, the band turns in a well-produced song that sounds like it could work well as a pub singalong. It’s a fine tune to end the disc, and it’s vaguely reminiscent of Jefferson Airplane‘s “Volunteers” albeit with a fine string overdub.

For fans of the music of the late sixties, Looking Towards the Sky is a treasure trove. Only the most hardcore of aficionados will have heard of (much less actually heard) this music before. But that’s owing to the vagaries of distribution, coupled with the surfeit of good musical ideas in that long-gone era. Put another way, if you like this sort of stuff, this is an absolutely essential purchase. And apparently there’s more to come…