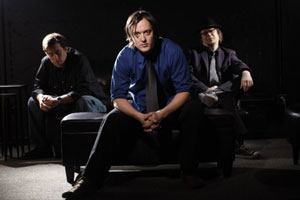 Memphis soul trio The City Champs brought their southern-fried (mostly) instrumental sounds to Asheville NC’s Orange Peel on Saturday February 19. Opening for the North Mississippi Allstars, the City Champs turned out a half-hour plus of their subtly updated take on the stylings of Booker T & the MGs.

While the trio’s debut album The Safecracker (reviewed here) deals in an ever-so-slightly jazzified take on Memphis soul, that dimension of the City Champs’ musical personality was dialed back on this night. Perhaps that was owing to the audience: the Orange Peel was packed to the brim with late 20s and early 30s backward baseball cap-wearing males (the audience was easily a 5:1 male-to-female ratio). That said, this veritable sausagefest of noodle-dancing frat boys really dug the City Champs.

Owing to their status as an opening act, the trio was situated right at the front edge of the stage. This reviewer’s position right up front meant that the sound heard was of the instruments themselves rather than the house PA (though the Orange Peel’s techs are well known for producing a crystal-clear — if loud — mix). We heard every hit of George Sluppick‘s snare, every crash of his cymbals.

Sluppick’s Rodgers jazz kit was a sight to behold. An undersized kick drum (probably a 20″) and oddly oversized cymbals may have looked odd, but they helped him deliver the goods. His stickwork did that perfect tightrope walk of in-the-pocket and loose.

Keyboardist Al Gamble‘s setup was notable as well. The foundation of his setup was a gutted Wurlitzer electric piano — well, actually just the legs and bottom — with what one could only call a “modesty panel” (probably off an old scrapped organ) hiding what he was actually playing. This reviewer’s best guess is a Hammond XK, a modern digital instrument designed to reproduce the sounds of the mighty, legendary B3 without the backbreaking , roadie-requiring nightmares that vintage instrument entails. Gamble made ample and deft use of a real Leslie speaker throughout the set.

Guitarist Joe Restivo played a guitar of unknown make, but it was definitely of the Epiphone Casino / Gibson ES-335 style, a double cutaway hollowbody. With a minimum of effects, Restivo delivered peerless and joy-giving solos throughout the set.

Most songs followed a similar format: a guitar solo, a keyboard solo, repeat and then both join in for a swirl of sound. Oddly, during the 30 to 40-minute set, the City Champs played no more than three or four tracks from their album, opting instead for more rock-oriented (yet excellent) material.

Odder still — not bad in any way, just a surprise to anyone who’s heard the completely instrumental album — midway through the set Gamble maneuvered his mic to a comfortable position and…sang. A credible cover of “Get Out of My Life, Woman” (performed most notably in 1966 by the Paul Butterfield Blues Band on their peerless and groundbreaking East-West) ensued.

Throughout the set, the crowd afforded attention and applause well beyond what is customary for an opening act. Though the tightly structured numbers of the City Champs were all about soloing, they’re no jam band, so their success at the hands of the jam-band audience can only be assumed to be down to the basic quality of the group’s songs and performances.

But then came…the jam. Guitarist Luther Dickinson of headliners the North Mississippi Allstars had been waiting in the wings all set (well, not exactly the wings; his presence onstage through most of the City Champs’ set was actually a bit distracting: a number of fans persisted in snapping photos of him as he watched and waited), and for the trio’s final number they welcomed him onstage. At that point his scenery-chewing antics took over. Dickinson proceeded to crank out slide guitar licks and apply them atop the City Champs’ music. The crowd absolutely loved it. Me, I was there to see and hear the Champs, not an Allman Brothers tribute act.

Nonetheless, the City Champs acquitted themselves well, and showed themselves to be consummate young professionals. In a perfect world they’d be opening for an act better suited to their style — say, Sharon Jones and the Dap-Kings — but in the meantime, this will do.

Not being an especially ardent fan of Dickie Betts, this reviewer left the show halfway through the first of the North Missisippi Allstars’ generic blooz numbers.