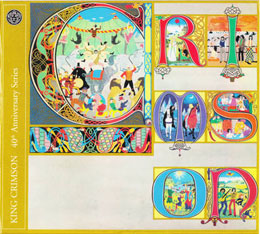 Among King Crimson fans, 1970’s album Lizard is a misunderstood release, and ranks among the least-popular of the group’s albums. That’s a shame, as Lizard is effective and groundbreaking in its own ways. King Crimson leader Robert Fripp was convinced by no less a fan than Porcupine Tree’s Steven Wilson that Lizard is deserving of serious reconsideration. To that end, Lizard is the third classic King Crimson album to receive careful remixing, remastering and re-release as part of that group’s 40th Anniversary Series.

Lizard occupies a transitional space in King Crimson’s history. After the celebrated debut In the Court of the Crimson King, nearly the whole group quit, and in its wake (heh) Fripp reconstituted the band and created In the Wake of Poseidon, an underrated album that is in many ways a rethinking of the first long-player.

On Lizard, Fripp enlisted the help of a group of conservatory jazz/classical players, chief among them pianist Keith Tippet. (Apparently, Fripp asked Tippet and his wife — the former Julie Driscoll, a major vocal talent — to join Crimson on a permanent basis. They declined.) Tippet had played on Poseidon as well, as had Mel Collins. Vocals were handled — for the most part — by returning bassist Gordon Haskell, and the nimble drumming of Andy McCulloch effectively recreated the unique vibe that Peter Giles had brought to the first two albums.

Fripp himself plays a lot more acoustic guitar than usual on Lizard. While there’s plenty of extremely lovely picking — and loads of crazed, dissonant electric guitar — Fripp’s slashing acoustic is a centerpiece of the album.

A cross between free jazz, heavy rock and classical styles, Lizard served up five tracks, none of which would ever see live performance.

“Cirkus” leads off the album, quickly establishing a musical feel familiar to listeners who enjoyed the first two albums. Gordon Haskell sings; he sang “Cadence and Cascade” on In the Wake of Poseidon, taking over for Greg Lake, who had departed mid-session to embark on his celebrated journey with Messrs. Emerson and Palmer. Here, Fripp and his band mates seem to be repeating the Poseidon approach of give-’em-more-first-album-sounds, but a few elements mark a sonic departure. The Mellotron horn lick — based mostly upon two notes — is especially ominous.

“Indoor Games” is built around Mel Collins’ saxes and flutes, plus horn parts from the jazz players who augment the lineup. McCulloch’s busy drums propel the tune forward. Fripp seems to be playing an entirely different song on his electric guitar, but it’s one that fits well alongside the primary melody. Haskell’s vocals — not held in especially high regard by longtime King Crimson fans — work well enough, but he does seem (on this track and others) to be straining to hit all the notes. The song’s instrumental interlude features demented guitar fills from Fripp, and Mel Collins shows himself (unsurprisingly) to be the creative equal of the departed Ian McDonald when it comes to devising and executing inventive parts. But things are ominous in a not-so-good way: where on “Cirkus” Peter Sinfield‘s lyrics fit, on “Indoor Games” the lyrics come off as forced, too cute by half. The British disdainfully call this style of lyric writing “twee.” The song ends with disturbing laughter from Haskell.

“Happy Family” crashes through the speakers with the sound of distorted organ (probably Farfisa), and a crazy jazz piano skittering of the sort that Mike Garson would make popular several years later on David Bowie‘s Aladdin Sane. Haskell’s double-tracked vocals (also matched in spots by Collins’ honking sax) sound like nothing so much as a frog. Heavy on the filigree, the song works musically, but Sinfield’s lyrics seem even more hackneyed, if that’s possible. To wit, so to speak: “Cheesecake, mousetrap, Grip-Pipe Thynne cried out, ‘We’re not Rin-Tin-Tin.'” Indeed. An instrumental remix would have been welcome.

The brief “Lady of the Dancing Water” more than redeems things. A lilting guitar part from Fripp sounds like a harpsichord. Collins’ lovely flute floats above a plaintive, effective vocal from Gordon Haskell. A near cousin to “Cadence and Cascade,” the song is a near high-water mark of Lizard.

The remaining tracks all fall under the heading of a suite called “Lizard,” and comprised side two of the original LP. “Prince Rupert Awakes” is an anomaly in the King Crimson catalog: it features lead vocals from Jon Anderson of Yes. Anderson’s gentle vocal begins the song, accompanied by little more than Keith Tippet’s piano. When the chorus arrives, Anderson sings in a more forceful manner, and the rest of the players join in. The chorus on “Prince Rupert Awakes” sounds very similar to Yes’ “Time and a Word” from roughly the same time. The straight-ahead, pop music style of the song will come as something of a shock to first-time listeners who think they know what to expect from a Crimson track. Never before (and never again) would a King Crimson song include “da da da da da”-type lyrics. All that said, it works. The end section of the song features a melodramatic lead Mellotron line from Fripp, and some McCulloch drumming reminiscent of Holst‘s Planets.

“Prince Rupert Awakes” segues seamlessly into “Bolero,” the high point of Lizard. Here King Crimson moves into the realm of classical-jazz-rock. With hints of a pop-classical approach, the main melodic line from “Rupert” is reprised, each time mutating into something jazzier. There’s a vaguely New Orleans jazz vibe a couple of minutes into the track, and it comes as quite a shock. For listeners wanting to rock, “Bolero” will come off as a disappointment at best, and self-conscious, preening noodling at worst. But accepted for what it is — an attempt to bridge the chasm between jazz, classical and rock forms — it’s successful at best, and a fascinating failure at worst. Take your pick. At least there aren’t many Sinfield lyrics (after one more King Crimson album he’d go on to write English-language lyrics for Italian proggers Premiata Forneria Marconi aka PFM).

There are some lyrics, though. Haskell sings Sinfield’s words on “The Battle of Glass Tears,” itself part of the “Bolero” part of “Lizard.” (Got that?) Fripp’s Mellotron takes its darkest turn yet with a string part that leads into a Collins spotlight — flutes and saxes — underpinned with more all-over-the-place percussion from McCulloch. Here, the classical elements fade away, and King Crimson produces jazz-rock vaguely in the style of Colloseum (but without that group’s blues elements). Dissonant and melodic at the same time, “The Battle of Glass Tears” represents a jazzier take on the instrumental passages from King Crimson’s first two long players.

A keening Fripp solo ends the “Lizard” suite; with its long and highly textured sustain, Fripp’s guitar on the track points the way toward his future work (including his fruitful collaborations with Brian Eno).

The short (under two minutes) “Big Top” ends the original album. Appropriately enough, the brief track is fully evocative (for once) of an actual open-air carnival. Its waltzing feel is playful, an adjective rarely apropos in any description of music from King Crimson.

In many ways Lizard represented a stylistic blind alley for King Crimson. The Lizard lineup never performed onstage, the Lizard songs never got played live by any Crimson lineup, and the jazz and classical directions explored (and/or hinted at) on Lizard were largely abandoned for something much more direct (albeit with some of the same players) on Islands, the group’s follow-up.

The 2010 expanded reissue of Lizard makes good on the promises of the format by including multiple audio formats of the album — on both CD and DVD — and adds the obligatory (yet worthwhile) bonus tracks that (we) punters expect.

An alternate take of “Lady of the Dancing Waters” features a more stripped-down arrangement, one consisting primarily of Haskell’s voice plus Tippet’s piano and Collins’ flutes. Tippet’s block chording is augmented with string Mellotron from Fripp. The alternate arrangement is more fully-developed than a demo, but it’s less than a fully-formed piece.

A different mix of “Bolero” — originally included on the Frame by Frame box set some years ago — is next. Perhaps a closer listen would reveal the ways in which this track differs from the Lizard version, but the differences don’t jump out clearly. For reasons not made clear here (perhaps they were discussed in Frame by Frame‘s liner notes?), Haskell’s bass lines have been augmented/overdubbed/replaced by post 70s Crimson bassist and Chapman Stick virtuoso Tony Levin.

A studio run-through of “Cirkus” features Haskell’s guide vocal, and said guide vocal isn’t all that different from the final product. While Gordon Haskell is a fine enough singer, somehow the melodies written for him to sing seem to stretch the boundaries of his capabilities. By the time of Islands — King Crimson’s next album — vocal and bass duties would be given over to roadie Boz Burrell, later of Bad Company.

Fripp’s contribution to the liner notes is odd. In it the wordy Crimson mainstay waxes nostalgic and — dare it be said — sentimental about Lizard. It’s essential reading for anyone interested in King Crimson’s development. Sid Smith’s liner notes are quite illuminating as well, incorporating some quotes from Steven Wilson regarding the process of preparing Lizard for its expanded re-release.

Absent from all discussion is the story behind Jon Anderson’s contribution. What led up to this set of circumstances? What did/does Anderson think of it? We are left to wonder. It’s near impossible, for example, to imagine the track with a Haskell vocal.

Perhaps surprisingly, the two songs comprising a bizarre single released around the same time as Lizard are not included here*. True, the inclusions of “Cat Food” — with its demented and aggressive Greg Lake vocal — and “Groon” — basically a Giles, Giles and Fripp leftover — would represent a discographical conundrum: neither represents a lineup bearing much in common with the Lizard lineup. But sonically, the a-side and b-side represent King Crimson’s excursion into jazz-rock, and musically they would sit well alongside the Lizard tracks. Yet who are we to quibble? Fripp — ably assisted by remix-master Steven Wilson — is delivering the goods with every entry to date in the 40th Anniversary Series.

* Both songs would (rightly) appear on the late 2010 reissue of In the Wake of Poseidon. — bk