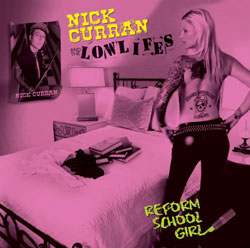 “Tough Lover” features distorted vocals, intentionally derivative (or, shall we say, historically referential) lyrics, gritty saxes, and a stomping beat. “Reel Rock Party” has that live in the studio aesthetic that has worked so well for artists like The Premiers (“Farmer John”) and many others. But the impossibly distorted vocals and loping (not swinging) beat evoke the smells of ashtrays and spilt bourbon. The is the real stuff, straight no chaser.

Nick Curran is clearly a revivalist. But his musical manner is so authentic — yet unaffected — that there’s no artifice to his delivery. He leaves little doubt that he means it, and unlike, say the Sex Pistols (“we mean it, man!”) he doesn’t have to say so. On the title track Curran revives the style of Shadow Morton and his work with the Shangri-Las. In its second verse, this role-reversal pastiche of Mary Weiss‘ group even features spot-on vocal accompaniment and sound effects guaranteed to make fans of a certain age smile broadly.

“Kill My Baby” combines the best of juke-joint 50s rock and roll with jump blues. Trust me: if you heard this on a mixtape of material from the era, you’d never suspect it was recorded any time after 1956, let alone in the 21st century. The ace electric guitar solo is the only sonic clue that it’s a contemporary track.

While Curran cans scream with the best of ’em, he can croon when the need arises. On “Psycho” he has it both ways, turning in an r&b-inflected song that evokes the Pacific Northwest of the very early 60s (home of that other song called “Psycho,” by the Sonics).

“Sheena’s Back” is another cut that would be right at home on the jump blues entries from Rhino’s long-out-of-print Blues Masters series. This is music for dancing. Or knife fights; take your pick. Impossibly, “Baby You Crazy” ups the ante: this is probably the sort of energy that Little Richard and Jerry Lee weren’t even allowed to put across onstage for fear of inciting a riot.

The titles of the remaining songs tell the story: “Ain’t No Good” (with slap bass and squealing guitar, it’s Stray Cats in double-time). “The Lowlife” (“Johnny B. Goode” meets the Legendary Wailers). “Dream Girl,” in which Curran and his band The Lowlifes cut a “Harlem Nocturne” vibe, is the only track that breaks the four-minute mark.

On “Flyin’ Blind” Curran welcomes guest and kindred spirit Phil Alvin on guitar and vocals. A fine guitarist, Curran isn’t afraid to share the spotlight. “Filthy” is one of several sax-led numbers on the album, and it finds Curran weaving his amped-up rockabilly guitar into the mix at just the right points. Derek Bossanova‘s insistent, pounding 88’s completely eliminate the need for rhythm guitar on Reform School Girl. The album wraps up with the Ramones-meet-fifties “Rocker.” In a mere 1:28 Curran and his Lowlifes say all that needs to be said.

Curran won a W.C. Handy Award (now called the Blues Music Award) in 2004. After his first four albums, Curran took a detour from his solo career and joined Kim Wilson’s Fabulous Thunderbirds. Now back on his own, this disc finds him on the same righteous path. “All killer no filler” is a shopworn phrase, but it certainly applies to Reform School Girl. Across all fourteen tracks of this album, Nick Curran is baaaaad. Let’s hope he never reforms.