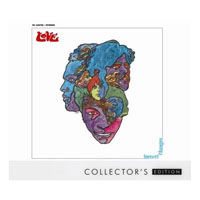 The mid 1960s was a fertile era for popular music. Unprecedented creativity was the norm. The list of stone classic albums released in those few years includes some amazing records: The Beatles‘ Rubber Soul, Revolver and Sgt. Pepper, The Rolling Stones‘ Aftermath and Between the Buttons, The Who Sell Out; the list goes on and on, and those few examples were all British acts. In the USA a number of phenomenal albums came out during that period. And many — like The Byrds‘ Fifth Dimension — were acclaimed at the time and maintain their status today. Yet other albums were given short shrift — dismissed critically dismissed or even panned, really — and only got their due belatedly. It’s hard to imagine now, but The Beach Boys‘ Pet Sounds wasn’t all that well-received in America upon its release.

Two other albums from that era didn’t get the respect they deserved: Moby Grape‘s self-titled debut album is filled with solid tracks. Yes, the hype surrounding its initial release — in a fit of hubris, the label released every track as an a-side or b-side of a single — but the fact remains that Moby Grape (a vastly underrated group in general) would never again reach those heights.

Forever Changes was, by contrast, the third album from L.A. scenesters Love. While the group’s first two records — the self-titled 1966 debut and 1967’s Da Capo — are each classics in their own right, little on those records telegraphed the directions Arthur Lee and company would explore a mere months later. Recorded amid the group’s breakup (they were so dissolute they almost didn’t get to play on the record), Forever Changes could have marked a new beginning for Love. Instead it sank with nearly no trace on its release. The mercurial Arthur Lee put together a new lineup of the group and headed to harder, less subtle musical territory.

But on Forever Changes, the band played with a light touch unlike anything they had done before. In fact Forever Changes doesn’t really sound like what anybody else was doing in 1967. The main sounds throughout the disc are acoustic rhythm guitar; single-note lead guitar runs that wouldn’t sound out of place on a Grateful Dead LP two or three years hence; a MOR brass section sounding like they escaped from a Herb Alpert session; sweeping-yet-tasteful string arrangements, and Arthur Lee’s voice, leaning more toward the Johnny Mathis end of things than the Mick Jagger side (he could do both convincingly). And the songs themselves are complex, oddly-structured pieces that don’t always adhere to the then- (and now) standard verse/chorus approach. But in light of all those qualities, the most amazing thing about Forever Changes is that it rocks.

Calling any of the tracks on Forever Changes a highlight does a disservice to the other ten songs, but the disc opener “Alone Again Or” (one of only two compositions by Bryan MacLean on the record) remains a stunning piece of music. Lee’s “A House is Not a Motel” manages both slashing rhythm guitar and piercing lead guitar. “Bummer in the Summer” throws in some countrified guitar picking that calls to mind Buffalo Springfield (or The Monkees).

Rhino has put together a beautifully-packaged reissue of this classic album. The first disc is the original album itself; the second disc includes an alternate mix of the album that manages to provide some new insight into the music, with different vocal lines and whatnot. This is an album designed for headphones, or really loud playing. Ten bonus tracks from the album’s sessions add a bit of context. They’re of the usual-suspects variety: demos, alternate backing tracks, a b-side. None is especially revelatory, but then they needn’t be. Forever Changes stands on its own as one of the greatest albums of the Sixties. Or any decade, for that matter.