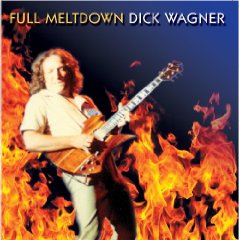 As a member of Frost, Ursa Major and — most notably — guitarist with Lou Reed and then Alice Cooper, Dick Wagner has made quite a name for himself as a musician’s musician. Well known among players, critics and liner-notes readers, Wagner remains something less than a household name among causal rock fans. A music business veteran, Dick Wagner has been lending his guitar playing and songwriting talents to a long list of projects from the 1960s onward.

Wagner has won more than a dozen platinum records, even more gold records, and many other awards. What he hasn’t done is gain widespread fame under his own name. After a few quality but little-noticed solo albums, Wagner decided to put together a collection of his unreleased tracks. Mostly recorded in the late 70s and early 90s, Full Meltdown is the name given to that collection.

On Full Meltdown Wagner’s guitar, arranging, songwriting and vocal skills are front and center. Though the tracks were recorded at various times and locations, there’s a general unity of sonic style throughout. With a sound halfway between over-the-top theatrical rock (in a good way: think of Meat Loaf and — naturally — Alice Cooper) and power rock / power ballad styles, Full Meltdown aims for that wide-screen, epic feel. And more often than not, Wagner’s aim is true. Not generally known as a lead vocalist, Wagner acquits himself credibly on these songs; he’s an effective rock vocalist, and his singing style is ideal for the anthemic tunes he pens. On “Insatiable Girl” Wagner sounds an awful lot like Robert Palmer, but the rest of the time he sings in a style closer to Steven Tyler.

Oddly enough, the songs that bear the stylistic mark of a 1980s power-rock style are in fact the songs from 1979, so it turns out that Wagner was ahead of his time; his commercial instincts have always been pretty accurate.

Every song save one on Full Meltdown was written or cowritten) by Wagner. The sole cover is a frantic updating of Lloyd Price‘s immortal “Stagger Lee.” Coauthors include Desmond Child, Alice Cooper and (on “Another Twist of the Knife”) John Wetton (Family, King Crimson, Roxy Music, Asia). That Wetton collaboration (Wetton doesn’t play on the track) is a highlight. One of Wagner’s solo authorship credits is “I’d Take the Bullet.” If he didn’t shop that tune to Meat Loaf, he made a huge mistake. If he did, the mistake was Meat Loaf’s: it’s a great tune, full of the melodrama Jim Steinman always aimed for.

Most of the fifteen songs on Full Meltdown clock in between three and five minutes, and that length seems ideal to get Wagner’s musical and lyrical points across. The couple of longer tracks have an ever-so-slightly whiff of overstaying their welcome, but they’re good tunes nonetheless.

Several tracks find Wagner handing all vocals and instruments, yet the arrangements are fully realized; not one of tracks on Full Meltdown sounds like an unfinished demo.

In the disc’s liner notes, Wagner makes tantalizing mention of some early studio efforts dating back to 1965, but sadly relates that said tapes are “lost to the ages.” At least we have these tracks, all of which find the master guitarist in fine form.