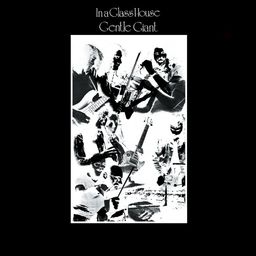 If you’re not expecting it, the smashing glass sounds that open “The Runaway,” the opening salvo of Gentle Giant’s 1973 In a Glass House, they’re a pretty jarring experience. While the use of found sounds in a musical context is pretty common in the 2st century, Gentle Giant’s use of glass-smashing to establish the song’s beat was rather groundbreaking. The nearest similar example is, of course, Pink Floyd‘s cash register opening of “Money” a mere few months earlier.

“The Runaway” establishes the by-now familiar Gentle Giant balances of heavy/light, intricate/straightforward. Derek Shulman‘s middle-ages style vocal delivery juxtaposes against Gary Green‘s distorted guitar figures while the rest of the band vamps (sort of). Kerry Minnear‘s tuned percussion solo is an unexpected delight, and his sparing but effective use of synthesizers adds interest to a song already full of fascinating components.

A scream kicks off the propulsive “Way of Life,” a high-powered tune that is vaguely evocative of Yes‘ “Long Distance Runaround” played at double speed. Kerry Minear’s multiple keyboard parts suggest Tony Banks’ work with Genesis, but with a harder edge. Unexpected meter shifts keep the listener delightfully off-center. Three minutes in, the song switches to a lilting renaissance fair style, and then back to a majestic keyboard-led interlude.

“Experience” again crosses a medieval texture with prog elements like heavily distorted guitars and heavy bass lines. While “Experience” is the track on In a Glass House that’s most accessible to standard rock audiences, it’s skewed enough — with musical twists and turns — to fit neatly into the Gentle Giant aesthetic.

The lilting chamber music arrangement of “A Reunion” offers a break from the complicated music elsewhere on In a Glass House. Derek Shulman’s expressive voice is equally adept at vocal acrobatics and mellow, bedsit melodies, and the brief “A Reunion” happily offers up the latter.

The title track closes the album. Led by a sawing violin (well, really more of a British isles folk fiddle here) the song brings together all of the elements that make Gentle Giant special. As always, there’s much happening at once. An almost-funky guitar melody leads to a mélange of keyboard instruments, all doing their own thing. Slow and deliberate one moment, frenetic the next, “In a Glass House” covers all the bases. Saxophone fills, stacked vocal harmonies, percussion left turns…they’re all here. The highlight of a uniformly excellent album, “In a Glass House” is nearly perfect exemplar of all the qualities that make Gentle Giant so revered in the annals of progressive rock. A brief, clever end piece ties the album together musically.

In a Glass House is highly recommended, especially to those musically perverse listeners who don’t think Yes was ambitious enough. The 2010 reissue is remixed, and digital versions include related bonus tracks.