Album Review: Gentle Giant – The Power and the Glory (2010 reissue) 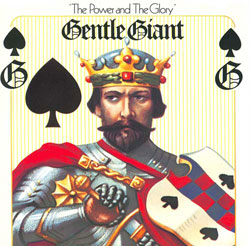 As “Proclamation” — the opening track on Gentle Giant‘s 1974 album The Power and the Glory, newly remastered and reissued in 2010 — unfolds, it may at first seem that the song isn’t grounded in any sort of accessible melodic configuration. Kerry Minnear‘s nimble, skittish electric keyboard and Derek Shulman‘s high-flying vocal acrobatics seem to jump around, ignorant of the idea that someone else might want to follow what they’re doing. Ray Shulman‘s bass enters into the dialogue, and then — about two minutes into the song — things get really strange. But while each player (the aforementioned three, plus John Weathers on drums and Gary Green on guitar) has a lot going on, it all starts coming together. What at first seemed an insular set of nearly-random notes evolves into a melody.

Or, sort of one. Despite an approach that is firmly in the genre of progressive rock, Gentle Giant songs always lean in the direction of melody. That melody might be odd, and it might take a few listens to latch onto it, but the melody’s always there. Listening to a Gentle Giant album is a bit like attending a Shakespeare play for the first time: for the first few minutes, it all seems so foreign, tough to follow. But then the intrepid listener settles in and is able to enjoy the charms therein.

“So Sincere” is the sort of track that causes those who don’t appreciate prog to say things like, “it’s annoying” or “that’s giving me a headache.” But close listening reveals an intricate, deeply layered track with a fetching melody. Yes, it’s tough during most of the song even to follow the beat, and it can sound like one player is playing his intricate part with no regard to what his bandmates are doing, but it all holds together in a manic fashion. Gary Green’s slashing guitar isn’t often cited as a key component of Gentle Giant’s music, but on “So Sincere” he weaves a finely-wrought, aggressive solo.

“Aspirations” serves up a more immediate melody, highlighted by Minnear’s electric piano and gentle vocal*. With a sound that (on this cut, anyway) occupies that musical space halfway between Yes and early King Crimson, the band weaves a lovely tune that is nonetheless full of Gentle Giant-style flourishes.

Gentle Giant’s medieval bent finally comes to the fore on “Playing the Game,” but it’s tempered with a sound not unlike Supertramp. Having possibly chased away timid listeners with its first few tracks, on “Playing the Game” The Power and the Glory serves up a melody that’s relatively easy to follow, even on first listen. Ray Shulman’s muscular bass leads the way.

At first, the song’s middle section seems to have no connection to the rest of the tune, but Minnear’s familiar and intricate keyboard figure brings things together. A gritty organ adds unexpected texture during a heavy and longish instrumental passage. One doesn’t dance to Gentle Giant, certainly, but “Playing the Game” comes as close to that sort of approach as Gentle Giant would ever get in the mid 1970s. (Thank goodness.)

“Cogs in Cogs” is a perfectly-named song. The highly intricate figures that each player (and vocalist) employs are of the head-spinning variety. All the musical parts are twirling wildly, yet the net effect is seamless. Derek Shulman’s multiple vocal overdubs feature him singing a round with himself. The song also rocks harder than most of the rest of The Power and the Glory, itself a pretty rocking disc overall.

“No God’s a Man” makes the vocal overdubs of “Cogs in Cogs” seems tame in comparison. Shulman’s voice weaves in and out of complex figures, while the other players chart their own exacting courses. Paradoxically, although there is (as always) a lot going on musically in this tune, the musicians manage to keep plenty of air in the arrangement: the intricate playing never seems like filigree. Everything belongs.

“The Face” crosses the medieval vibe with that off-kilter approach so loved by Gentle Giant fans. Ray Shulman’s voice soars to new heights; in a lesser tune, said vocal heights might come off as showoffy; here they make sense, since the instruments are doing the same sort of ting. Minnear’s crazed electric violin solo is a highlight: Electric Light Orchestra never did anything like that.

The Power and the Glory concludes — appropriately enough — with “Valedictory.” Featuring the heaviest playing of the record, the song starts out sounding like it might move in the style of Deep Purple or Aersomith, but those fears are quickly laid to rest as the song heads into typically skewed Gentle Giant territory.

Recorded in late 1973 and early 1974, The Power and the Glory was the sixth release from Gentle Giant. On the group’s next long-player Free Hand, they would produce their most successful balance of innovation and accessibility, and would be rewarded with the highest chart action of their career.

The 2010 CD reissue of The Power and the Glory boasts excellent sound. Remixed from the original analog with the group’s approval, the CD release allows the listener to follow the intricacies of the music. Digital downloads of the album featured previously-unreleased bonus tracks.

* Sincere thanks to reader Ira for correcting me.