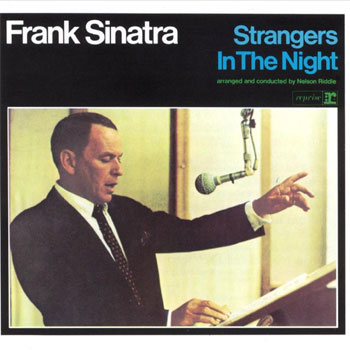 Sure, the title track of Frank Sinatra’s 1966 album Strangers in the Night is sappy, MOR stuff. Impeccably arranged and finding the 51-year old Sinatra in fine vocal form, the song nonetheless was hopelessly out of step with the current musical trends. “Adult” music as it was, the song bumped no less a song than the Beatles’ “Paperback Writer” off of the number one spot on the charts.

Thing is, the song – with its famous “do-be-do-be-do” – is unlike anything else on the album. And the remaining nine tracks are exemplars of a style. Big-band Vegas-y arrangements with plenty going on musically, the other tunes rank right up there with the most enjoyable work Sinatra ever turned out.

That’s thanks in large part to arranger Nelson Riddle. Sadly, Sinatra would never again with Riddle, but on the Strangers in the Night LP, the ace arranger works his magic, developing sympathetic backing for the Chairman.

Recorded in three days over a month-long period in 1966, these songs survey the adult pop landscape. “Summer Wind” is a song that originated in Germany, but it appears here with new lyrics by famed lyricist Johnny Mercer (“Autumn Leaves,” “Moon River” and literally hundreds of others). As is typical, Sinatra’s vocal effortlessly glides atop Riddle’s arrangement.

Sinatra’s legendary vocal control is a highlight of “All or Nothing at All.” Riddle’s arrangement starts out subtly and builds as the song unfolds: instruments come in, the drums loosen up, and the swinging beat becomes more prominent overall. At a shade over four minutes, it’s the longest tune on Strangers in the Night, but not a moment is wasted; the long instrumental section is a delight.

In its own way, that song’s big-band arrangement points out the sonic connection between swing-pop and rock and roll. In the postwar era, many bands found themselves unable to support the expense of bringing a big band on the road. So bandleaders like Louis Jordan stripped the bands down to a handful of musicians, and played harder to make up for what was missing. That “jump blues” or swing music  — though not primarily guitar-led (saxophone was the most common lead instrument) informed much of rock and roll with its sensibility.

But back to Sinatra. “Call Me” had been a big hit for Petula Clark, but in Sinatra’s hands the song is slowed a bit and reinvented as a big band number. Once again Sinatra proves his mettle as a chief interpreter of others’ work.

“You’re Driving Me Crazy!” is a musical cousin to “I’ve Got You Under My Skin,” but the playful, upbeat arrangement gives the song its own unique identity. When – after Sinatra’s “How true” vocal line – the band blasts out, the listener knows that it’s going to be a pull-out-all-the-stops affair, and it is.

The pace is dramatically dropped for Sinatra’s reading of the then-popular Lerner-Loewe number “On a Clear Day (You Can See Forever)”. The same-named play had recently concluded a successful Broadway run.

Sinatra’s reading of “My Baby Just Cares for Me” focuses on his ability to phrase the lyrics to his liking. Easily parodied because of its unique nature, this phrasing approach was in fact a big part of what made Sinatra special. While it didn’t always work – it occasionally sounded gratuitous – here the approach works well. This technique is yet another way that Sinatra made songs his own.

Another Petula Clark hit — “Downtown” — gets the Sinatra treatment. A showy band arrangement attempts to recreate the hustle and bustle of the city, and a snare-led drum pattern propels the song. A few odd vocalisms (“ugh” and “ewww”) seem out of place, but overall Sinatra turns in a credible cover of the hit.

“Yes Sir, That’s My Baby” finds Sinatra back on more familiar and comfortable musical footing. A swinging beat and electric organ figure prominently in the big-band arrangement. Riddle even weaves in a string part, yet the song isn’t overstuffed. When you’re as confident a vocalist as Frank Sinatra, you can give the band plenty of space for solo turns.

The original 1966 LP wraps up with a frenetic paced reading of “The Most Beautiful Girl in the World.” The vocals race a bongo figure, a hopped-up drum part and a crazed orchestra. It’s easy to picture a conductor’s arms flailing wildly, egging the band faster and faster. Tight as the proverbial drum, the band careens through the tune, and Sinatra’s voice soars above it all, making the whole affair seem completely effortless.

The 2010 reissue adds a live reading of “Strangers in the Night” from a Tokyo concert in 1985. Though nearly two decades had passed, Sinatra’s voice seemed only slightly the worse for wear. The arrangement keeps fairly close to the original.

Also included from that same ’85 concert is “All or Nothing at All.” Here Sinatra doesn’t hold his notes quite as long – he was seventy, after all – but he turns in a near-flawless and entertaining performance. And the band absolutely kills.

A studio outtake from the original album sessions closes the 2010 reissue. “Yes Sir, That’s My Baby” appears here in a slightly more organic version. Apparently no two Sinatra vocal readings were exactly alike; the differences from the released version are slight, but worth hearing.

As a snapshot of where Frank Sinatra stood in relation to the popular music of the day, the 2010 reissue of his 1966 LP Strangers in the Night is a worthwhile purchase. But it’s also a worthwhile listen even when shorn of that context. As the old saying goes, don’t judge an album by its title track: while “Strangers in the Night” is a syrupy tune (as kids, we made fun of it whenever it came on the radio — which it often did), the remaining nine tracks show the master still close to his peak.