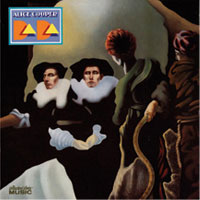 For 1982’s Dada, Alice Cooper brought producer Bob Ezrin back to run the console. Ezrin and Cooper had worked together on many of Cooper’s most commercially successful albums in the 70s, and by ’82 Ezrin himself was at something of a critical high water mark himself, owing in no small part to his work on Pink Floyd‘s opus The Wall.

What’s more, Cooper enlisted the aid of Ezrin on keyboards, and veteran rocker Dick Wagner (The Frost, Lou Reed, Ursa Major, most of Alice Cooper’s biggest hits…) on guitar throughout the album. Unlike the stylistic dabbling of 1981’s Special Forces, Dada adopted a more rocking and theatrical approach, one familiar to anyone who followed Cooper’s 1970s career. But in a radical departure, most of the album was created using the then-radically-new Fairlight CMI, a synthesizer/computer capable (people then believed) of doing almost anything.

Perhaps surprisingly, the results were impressive. Not widely known as a sonic innovator, Cooper created a compelling work on Dada. The creepy, foreboding opening track “Da” (penned by Ezrin) has a vibe not miles removed from Pink Floyd’s The Wall. The track sounds like the opening of a set-piece, and that’s exactly what it is. For much of the cut, Cooper’s barely present on the tune, but it’s the sonic equivalent of a show in which the band vamps before the star strolls onstage. When he does — in a spoken dialogue — he sounds eerily like actor James Woods.

“Enough’s Enough” does betray the sequenced-drums vibe (Cooper admits to as much in the original liner notes) but it’s a showstopper; like most of the songs on Dada, it sounds like it would have gone over well onstage. The song explores a dysfunctional father-son relationship, albeit with a trademark Cooper spin on the proceedings.

“Former Lee Warner” is another macabre Cooper narrative. While it doesn’t rock so much, that’s not its mission. Had Cooper’s star been in ascent in 1982, the song might have been ripe for treatment as an MTV-destined video. Sadly, it was not to be, and in fact to date none of Dada‘s tunes has ever been performed onstage by Cooper.

“No Man’s Land” rocks like 70s Cooper while still sounding contemporary enough for ’83. Cooper’s vocals are more expressive and less mannered than many other tracks from the era. “Dyslexia” is a nod in the direction of synthy new wave, but it’s a more effective bid than most of Cooper’s attempts in that direction. A distant musical cousin of M‘s “Pop Muzik,” the track is a tad sprightly for Cooper, but worthwhile nonetheless.

Alice Cooper shows his heavy metal side on “Scarlet and Sheba.” Synthesizers purvey a Middle Eastern vibe while guitars set on “stun” create something between Pink Floyd and Black Sabbath. The nonexistent chart action of Dada suggests that there was a limited market for this kind of thing in 1982, but that might be down more to Cooper’s lower profile (and the loss of a chunk of his audience in the wake of earlier missteps).

“I Love America” is another of Dada‘s spoken pieces: Cooper rabbits on about stuff he loves. Kindred souls The Tubes did it much better (and funnier) in 1976 with “Proud to Be An American” (no relation to the execrable Lee Greenwood jingoistic pap). The music’s pretty good, though.

“Fresh Blood” is a mixed bag. Musically it’s in Mr. Mister meets Steely Dan territory; lyrically it’s vintage Alice Cooper. But like most of Dada‘s tunes, it’s surprisingly organic for an album created on a computer (with all due respect to Todd Rundgren, listen to Utopia‘s POV or the Tubes’ Love Bomb for examples of how not to make an album using purely digital technology).

“Pass the Gun Around” shows that Cooper’s guns-and-ammo fixation hadn’t gone away. Musically it’s among the most involved and interesting tracks on Dada. Ezrin’s production skills and Wagner’s writing prowess help make the track a fitting end to the album. A long instrumental section is the song’s highlight.

Cooper was friendly with famed artist Salvador Dali; in 1973 the duo were immortalized in a hologram art installation. Dada’s album art (by Glen McKenzie) riffs on Dali’s Slave Market with the Disappearing Bust of Voltaire, working Cooper’s face into the image. Clever stuff.

After the creative success but commercial invisibility of Dada, Cooper took a few years off to dry out and combat his alcoholism. When he returned in 1986 with Constrictor, the results suggested he had learned from the past: that album built on the creativity of Dada while discarding the stylistic blind alleys of his earlier 80s releases.