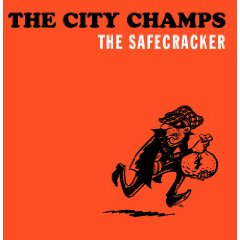 The gospel-flavored organ solo that opens the title cut on the City Champs‘ The Safecracker is something of a red herring. Though the sonorous B3 tones suggest that listeners will be treated to something along the lines of Boz Scaggs‘ 1969 cover of Fenton Robinson‘s classic “Loan Me a Dime,” instead this Memphis trio launches into a Booker T & the MGs-styled number.

And that’s just fine. Across the landscape of seven tracks, this instrumental trio (organ/guitar/drums) hews fairly close to the soul-revivalist genre, but they do so with a looser, less studied approach than (the also excellent) Leeds, England group The New Mastersounds.

The title track’s lean, resounding lead guitar solo is no study in precision, and in fact the song is all the better for that looseness. Operating without a bass guitar, the group’s bottom end is held together through drums and nimble use of organ pedals. The lack of vocals and lyrics doesn’t dull the group’s expressive edge a bit; the virtual dialogue of clean lead lines — courtesy of Al Gamble‘s organ and Joe Restivo‘s guitar — speaks volumes.

It’s true that the riffs that make up tunes like “Takin’ State” sound an awful lot like Booker T outtakes, but the songs are imbued with such a feel-good vibe that there’s no point holding that against the group. While all three players are possessed of considerable talent, they rein in any showoff-y tendencies and concentrate on playing as a group.

The group has an innate feel for song delivery. When Restivo steps forward (figuratively, at least) for a tasty extended solo — like the one on “Love is a Losing Game” — drummer George Sluppick holds things together, and Al Gamble’s organ fades into the shadows. But — and this is key — Gamble’s work, even when it’s subtle and working as a backing part — is soulful, expressive and (if one listens closely enough) quite interesting. When it’s Gamble’s turn to shine, Restivo responds in turn.

The feel of the trio is amazingly organic, and the transition from one solo turn to another happens so smoothly, it’s almost imperceptible. As I’ve said about other acts (but only when it applies) these guys really do play in service to the songs. Each number is a well-developed song, not merely an excuse for some solo time.

A jazz-meets-Bar-Kays vibe takes hold on “Poppin'”, and Restivo’s guitar even displays hints of distortion. The explosive, jubilant tune finds all three letting loose; the song’s mid-album placement is a good strategy: build the energy level, as in a live show. The verse-ending descending phrases in “Comin’ Home Baby” evoke memories of Spencer Davis Group‘s “I’m a Man,” and the soulful connection is a most pleasant one.

The album’s production is spare and gimmick-free; of course, anything else would be a travesty. The analog warmth is palpable. The Safecracker sounds, one strongly suspects, quite similar to a live show by The City Champs. The group begins a whirlwind tour (opening for the North Mississippi Allstars) in support of The Safecracker at the tail-end of January, with dates across the USA. I’ll update in mid-February after I see them onstage in Asheville NC.