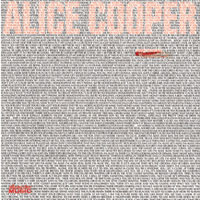 By 1981 Alice Cooper really had begun, thankfully, to flush the fashion (something he made an empty threat to do two years earlier). To the extent that Cooper had a formula, he was doing his best to move back toward it as the 1980s unfolded. After the creative disaster of 1981’s Special Forces, he co-produced the 1982 follow-up Zipper Catches Skin with his bass player Erik Scott. Cooper brought Flo and Eddie back to add their winning vocal harmonies, and Dick Wagner was present for some tasty lead guitar runs.

The synthesizer flourishes and spare arrangement approach of Special Forces wasn’t completely abandoned, but Zipper Catches Skin found Cooper aiming for a more open, wide-screen sonic palette, one that would hopefully appeal to his fans more than the previous couple of platters.

“Zorro’s Ascent” isn’t among the canon of classic Cooper, but it avoids most of the previous album’s mistakes. “Make that Money (Scrooge’s Song)” is a foot-stomping rocker in the proud Alice Cooper tradition. Dick Wagner’s contribution is unmistakable and welcome, and makes the early point that Zipper Catches Skin is a guitar album. In fact no fewer than four axemen lend their talents on the set, and synthesizers — while still present — are used to good effect.

“I Am the Future” from the classic film Class of ’84 (remember that? Me neither.) sounds like a Jim Steinman/Meat Loaf piece, and that’s great: what was Bat Out of Hell, after all, but an amalgam of Bruce Springsteen and Alice Cooper?

Most of the tracks on Alice Cooper’s Zipper Catches Skin were co-written with guitarists John Nitzinger or Dick Wagner (or both). Despite its awful title, “No Baloney Homosapiens” is a reasonably rocking tune. It’s not among Cooper’s best, but it’s a step in the right direction. Once again the big arrangement saves the day; apparently Cooper learned quickly that the trendy small-scale boxy sound wasn’t gonna get it for his music.

“Adaptable (Anything for You)” also doesn’t rank among Cooper’s best work, but it’s no misfire. And it’s consistent with the Zipper Catches Skin approach of short songs: fully half of the album’s ten tracks clock in under three minutes.

“I Like Girls” sounds like standard 80s-style arena rock — think of Loverboy. (Now stop. Please.) Judged against 70s Cooper, this would be a travesty. Viewed alongside the last couple of discs, it’s actually pretty good. It’s a bit disappointing that such a standard-issue song ends up being viewed as a return to form, but there it is. A sped-up end bit adds interest.

“Remarkably Insincere” and “Tag, You’re It” wed the big-guitar approach with the click-tracks 80s vibe. These tracks (and others alongside them on Zipper Catches Skin) suggest that Cooper was still searching for a new sound (as opposed to flailing for one on Special Forces).

The stop-start “I Better Be Good” has a catchy vocal hook, and probably worked well as a live number in the 80s.

Zipper Catches Skin closes with yet another long-winded and parenthetical title, “I’m Alive (That Was the Day My Dead Pet Returned to Save My Life)”. The talents of Wagner plus Flo and Eddie help a great deal.

Collectors’ Choice added the track “For Britain Only” onto the 2010 reissue. Nothing earth-shaking, the track does feature some tasty guitar work in the outro.

An interesting aside for liner-note aficionados: Collectors’ Choice isn’t always known for deluxe packaging of its reissues, but the label does what it can. In many cases original album art isn’t readily available, so a high-resolution scan of an old LP cover must suffice. That seems to be the case it Zipper Catches Skin, because a close reading of the back cover shows that the artwork from Zipper Catches Skin‘s Canadian release was used for this reissue.

Ultimately, Zipper Catches Skin was a step in the right direction for Cooper; he would make good on that album’s creative (but not commercial: it failed to chart) momentum a few months later with 1983’s Dada.