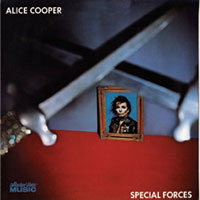 As the 1970s ended, so did Alice Cooper‘s chart run. After an impressive string of hits beginning with 1971’s “I’m Eighteen” (from the album Love it to Death) and more or less ending with Welcome to My Nightmare‘s ballad “Only Women Bleed” in 1975, the chart action pretty much dried up. There was the minor hit of “We’re All Clones” (#40 on the Billboard chart) from 1980’s Flush the Fashion, but that fluke probably had more to do with the song’s slight similarity to Gary Numan‘s “Cars” than any particular virtues of the song itself. In fact “We’re All Clones” had very little in common sonically with what fans of Alice Cooper had come to expect.

Cooper (born Vincent Furnier, but you knew that) may well have wondered: what happened? Yes, new wave was in full commercial swing by the early 80s, but other veteran acts — most notably The Tubes — were seeing some of the best sales figures of their career, and were keeping key elements of their considerable theatricality and bombast intact, even in the face of stripped-down music’s popularity.

By the time of 1981’s Special Forces, Cooper seemed to have lost his way. Gone was ace guitarist Dick Wagner, axeman on most of Cooper’s best post Alice Cooper Group work. Gone, too, was the consistency of Bob Ezrin‘s sympathetic and just-right over-the-top production skills. Ezrin’s production hand was an important component in Cooper’s success right up through 1976’s Alice Cooper Goes to Hell; a good argument can be made that Alice Cooper started to lose his way right around the time he started using other producers. After using Roy Thomas Baker (known for his work with bombast kings, uh, Queen) as producer for Flush the Fashion, when the time came for the next long player, Cooper again pivoted, settling on Richard Polodor.

Polodor was something of an odd choice. Though an expert hand with an impressive string of credits (including albums by Steppenwolf, Three Dog Night, and Black Oak Arkansas), by the time of Special Forces, Polodor had moved in the direction of clean, straightforward powerpop. He produced well-regarded albums by artists including Phil Seymour and 20/20. Neither of those acts had much in common with the style Cooper was known for turning out.

Perhaps that was the point. But if so, the music on Special Forces belied that approach. Ten tracks that concentrated on Cooper’s then-current obsessions (weapons and horror; sound familiar?), the lyrical content was full of the Cooper brand of bombast. And while the lean production aesthetic of Special Forces may have been in step with the sound of 1981, it didn’t mesh well with the songs themselves.

Guitar duties were ceded to Mike Pinera (known for his time in Iron Butterfly, who Polodor had also produced) and Duane Hitchings, a journeyman musician who helped Rod Stewart (uh-oh…) reach some chart heights. Polodor and Cooper’s approach eschewed much of the backing vocal overdubs (often from Flo and Eddie) that had been such an important part of the Cooper sound.

To the songs. “Who Do You Think We Are” kicks off with a cinematic synthesizer opening that suggests a slightly darker Moody Blues, and gives way to a straight-ahead rocker that owes more to Jerry Lee Lewis. Cooper’s gravelly vocals — never a strong suit, but often endearing in and of themselves — have a bit of menace, but there’s a creeping feeling that Cooper’s phoning it in here.

A cover of the Love classic “Seven and Seven Is” may have seemed like a good idea. In fact this was a case of Cooper being — for once — too far out in front. Love was criminally underappreciated in the sixties, and they wouldn’t begin to get their critical due for many years hence. Nice thought, though. Cooper’s version uses arpeggiated keyboards in place of the machine-gun drumming, and the odd, stuttering changes of the original are steamrollered by Cooper’s session team/band (they were actually called Special Forces). A misfire, but a noble one.

The first-person character narrative of “Prettiest Cop on the Block” sounds more like the Alice fans had come to know and love. In retrospect the mix doesn’t seem powerful enough — the guitars don’t roar — but for 1981 Polodor’s instincts weren’t too wide of the mark. The lyrical double entendres are pretty well beaten into the ground, but then subtlety was never an Alice Cooper forte.

“Don’t Talk Old to Me” is, for Cooper, a bit experimental. The strange beat only sort of works, but the keyboard-led sections with their vocal crosstalk are a highlight. The track offers a brief but tantalizing glimpse of classic Cooper.

“Generation Landslide ’81” all but raises the white flag, admitting: hey, we’re out of ideas, so here’s a tune from 1973’s Billion Dollar Babies. The new version — billed as a live track — adds nothing to the original, mixes the instruments too low, and is clearly a studio cut with sloppily dubbed-on audience sounds. (Perhaps an homage to Peter Frampton‘s Frampton Comes Alive? Nah.) A swing and a big miss.

“Skeletons in the Closet,” on the other hand, is a successful melding of Cooper’s approach with the synthy, new-wave sound of the day. The spooky spoken/sung vocals work perfectly on the song. The Cooper energy is a bit lacking, but the vaguely macabre harpsichord-led arrangement helps. Still, with a different vocal, this song wouldn’t have been out of place on a Supertramp album of the era. And what’s up with that?

Synthesizers take the spotlight on “You Want It, You Got It.” Digital handclaps and other oh-so 1981 gimmicks are scattered all over the tune, and the lyrics consist of little more than a repeating of the title phrase, itself a tired one. This track ends up sounding like an unfinished demo; guitars are almost absent. Cooper may have literally phoned in his part on this number.

The axes return on “You Look Good in Rags.” In fact a catchy riff is the basis of the song, which is the top choice for return-to-form status on Special Forces. The sort-of a cappella break near the song’s end is an interesting approach: perhaps an early use of sampling?

“You’re a Movie” — the third track in a row on Special Forces to start with the word “you” — finds Alice in speaking-not-singing mode. The bloodless, robotic backing vocals suggest another bid for a piece of Gary Numan’s audience. Pandering to two camps — old fans and those into new wave sounds — resulted in disappointing both. On “You’re a Movie” Cooper tries to sound jaded and decadent, but instead he sounds tired and disinterested. Now that’ a real shock from the shockmeister.

The original album wraps up with “Vicious Rumours,” a case of too little too late. The track features chugging buzzsaw guitars and Alice kinda singing again, but if this is the reward for sitting through the half hour of near-ennui that is Special Forces, it’s nearly a booby prize.

The 2010 Collectors’ Choice reissue adds the “bonus” track “Look at You Over There, Ripping the Sawdust From My Teddybear.” Cooper actually sings on the song (and does so well), and the arrangement features electric piano (not synthesizers). Despite its unwieldy title, it’s a far, far better thing better than anything on the original Special Forces.

Luckily, Alice Cooper wasn’t the creatively spent force that Special Forces suggested. His next album Zipper Catches Skin (1982) found him on a creative upswing, righting several of Special Forces‘ wrongs. And the album after that (1983’s Dada) would be even better.