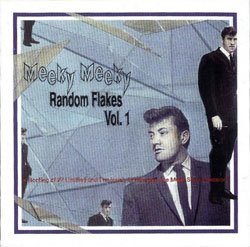 Much has been written about Joe Meek. His production technique might be labeled savant-garde: doing everything “wrong” he sometimes — often, in fact — got it right. Now recognized as a vanguard of the independent producer movement, Meek’s work in the pre-Beatlemania era was nothing short of joyously exploratory. Freed from (or just plain ignoring) conventions regarding how to make a record, this father of DIY productions did it his way, often with remarkable results.

As far as the artists he worked with, things were hit or miss. He often employed high quality session musicians to play on his records: Jimmy Page (later of the Yardbirds and Led Zeppelin), future Jimi Hendrix drummer Mitch Mitchell, and Ritchie Blackmore (later with Deep Purple and Rainbow) were among the long list of sessioners who lent their talents to Meek productions. But the front-people on the recordings were often talents of, shall we say, a lesser stripe.

Recording in his home studio (itself a radical notion), Meek often had a very clear idea of what he wanted his productions to sound like; he “groomed” his artists and controlled sessions in a fashion not unlike his hero Phil Spector. But Meek couldn’t read music, lacked any ability to carry even a rudimentary tune, and couldn’t play a musical instrument.

So how could he communicate his ideas to the players, especially when the tunes were ones of his own composition? Bizarrely (or naturally, if you were Joe Meek), he would find a record that had a similar aesthetic to what he had in mind — a similar beat, tempo or arrangement — and then he’d make a one-off recording of himself “singing” his tune while that record played in the background. In the case of an instrumental tune — and Meek recorded dozens such items — he would sing the lead instrument’s melody.

Well, sort of. And the collectors’ recording Meeky Meeky: Random Flakes Vol. 1 includes several of these gems. With nary a whit of self-consciousness, the near-tuneless Meek warbles his melody lines and/or lyrics over the top of other recordings. This has to be heard to be believed; while in retrospect it might seem primitive, silly or even stupid, there’s no denying that the method did what it needed to do.

Sometimes Meek applied the method to his basic tracks. Atop instrumentation awash in echo, reverb and compression (the last, a technique that “squashes” the high and low frequencies on a recording to make it come across more forcefully, especially on old AM radio), Meek would warble the solo melody to tunes like his biggest hit “Telstar.” On Meeky Meeky, adventurous listeners can hear Meek’s embryonic ideas for that song’s classic clavioline melody. Is it weird? Absolutely.

Snippets of the French children’s ditty “On the Bridge of Avignon” are heard, showing Meek’s undeniable fixation on the work and style of Buddy Holly. On many of the tracks, Meek’s bizarre ideas are displayed in full flower: chirpy backing vocals, primitive means of producing sound effects.

Joe Meek worked in a number of genres. Most of his work would fall loosely into what might now be called pre-Beatles UK pop, but he recorded in freakbeat, mod and (arguably) proto-psychedelic styles in the early 1960s. He produced nearly 150 singles, and fully one-third of them charted, either despite or owing to his singular approach to the creative process.

Meeky Meeky includes twenty-odd (and I do mean odd) outtakes and work-tapes from Meek’s vaults; the specific origin of this material isn’t clear, which isn’t surprising for an unauthorized set. Though a number of legitimate Meek collections have surfaced in the last couple of decades, Meeky Meeky is by far the strangest. Not recommended for those new to Meek, the set is nonetheless required listening to anyone who has listened to (and appreciated) collections such as It’s Hard to Believe: The Amazing World of Joe Meek or Vampires, Cowboys, Spacemen and Spooks: The Very Best of Joe Meek’s Instrumentals. The fragmentary nature of the recordings means that a listen to Meeky Meeky won’t be a passive experience. At best, the listener will gain amusing insight into Meek’s process; at worst it will scare away, well, nearly everyone else.

No discussion of Meeky Meeky would be complete without a mention of the bizarre (even for Joe Meek) untitled track #27. A love poem to someone named Dave, the track finds Meek reciting heart-on-the-sleeve sentiments to the object of his affection. All the while, syrupy MOR orchestration a la Bert Kaempfert swells in the background. Even setting aside the fact that homosexuality was still illegal in the UK when this track was recorded, this is still among the most unusual items ever committed to tape.

There’s no track notation for Meeky Meeky: Random Flakes Vol. 1, though intrepid listeners will figure out enough of what’s what to enjoy the set. And yes, the foreboding phrase “Volume 1” does in fact mean that a second disc of these clips does exist.

If your aesthetic barometer — your sensibility about such rigid concepts as “good” and “bad” — leans toward the conventional, then you’d do best not to make the effort to lay hands or ears on this set. And while it would be easy enough to enjoy Meeky Meek for its undeniable kitsch/unintended-comedy value, that sells it short. There’s value in this stuff, in its own skewed way. It’s a valuable historical document of likely interest to anyone who appreciates the recording studio as a sort of instrument unto itself.

Meek’s life ended in tragedy, but we won’t get into that here. Those interested in learning more are directed to three sources: good old Wikipedia for a quick overview, a chapter in Ritchie Unterberger‘s excellent book Unknown Legneds of Rock ‘n’ Roll; and an upcoming theatrical film about Meek starring Kevin Spacey in the lead role. [Update 2017: Yeah, that never happened. And owing to recent events, it probably never will. — bk]

A repeat of an important caveat: hearing Meek trill away with tuneless la-la-las can be an unnerving experience: who let this guy anywhere near a studio, you might well ask. But his work now enjoys critical acclaim for its innovation; knowingly or not Meek was a groundbreaking pioneer in the history of music production. It’s not a criminal overstatement to mention his name alongside Les Paul, Sam Phillips, Brian Wilson and Phil Spector. While certainly his creativity didn’t approach the levels of all of those names, what Meek did in his time did make a difference in the way records would ultimately be created. Meeky Meeky is a glimpse — and yes, perhaps a more intimate one that many would wish — into the behind-the-scenes world of Joe Meek’s production style.