I’m putting the finishing touches on a feature/interview with Barry Tashian of the Remains. That feature will run in London-based Shindig! magazine sometime in 2010. As a bit of a teaser, here’s one from the archives: a review of an unreleased audience recording of a Remains reunion show. Enjoy, and Happy New Year. 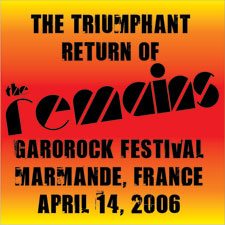 When music historians wax historic about lost groups of the 1960s, The Remains are invariably mentioned. Led by guitarist Barry Tashian, this Boston-based quartet seemed in 1965 poised to be the Next Big Thing, but as was so often the case, events conspired against them.

The Remains’ tight sound was influenced by R&B and blue-eyed soul, yet they could rave-up like The Yardbirds. One would have expected bigger things from a group that earned the right to tour as an opening act with The Beatles, and appeared on Hullabaloo and the Ed Sullivan Show. But the band grew restless, and Tashian folded the group on the eve of the album’s release.

Sadly, no bootleg recordings exist documenting the group in its heyday. An official, posthumously-issued live-in-the-studio session hints at the group’s live power. In the early 1970s rock archivist Lenny Kaye compiled the now-legendary Nuggets set, and turned on a new generation to the wild genius of The Remains’ over-the-top “Don’t Look Back.”

In 2005 the original group reappeared with a new album and tour. Like so many lost musical treasures, they are more appreciated in Europe than in the USA. So in April 2006 The Remains appeared onstage at the Garorock Festival in Marmande France. Fortunately a taper was present.

The one-hour recording is a bit distant, especially for the in-between song banter, but the clean recording captures a dynamic set from the group. As with their ’66 sets, the show is comprised largely of covers (including an ace rendition of Dylan‘s “Like a Rolling Stone”), but two of the greatest songs of the sixties appear in all their glory: the driving “Why Do I Cry?” and the aforementioned “Don’t Look Back” (in a cleverly extended arrangement). Though no plans have been announced, here’s hoping for a Stateside tour.