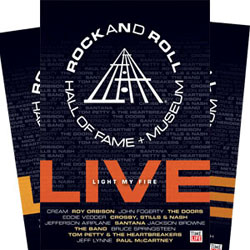 Ask yourself this, dear reader: are you at your very best after a night out on the town, one that involves an open bar? And to my musician friends: do you turn in your best performances after an endless stream of cocktails? Well, unless we’re in a time machine and you’re a member of The Replacements, the answer is generally no. Or perhaps “hell no.”

What we have here is a 3DVD set that teeters on the brink between valuable historical document and a too-much-information embarrassment of the first order. Over the course of nearly ten(!) hours, viewers are treated to a carefully- and (it must be said) lovingly-compiled mélange of introductory speeches, acceptance speeches, heartfelt and moving reunions…and “jam” sessions that would have been best left unrecorded, left to legend.

You may ask yourself: what would it be like to see some of rock’s giants share the stage? The answer is, sometimes great, sometimes pretty awful. When Prince joined Dhani Harrison and members of the Traveling Wilburys in a tribute to Dhani’s dad, it was something to see and hear. If Prince had an inclination to steal the show and over-emote or simulate copulation on his guitar, he repressed it. Instead he came out with a Telecaster and proceeded to play a transcendent solo on “While My Guitar Gently Weeps”. Dhani Harrison is seen smiling broadly and appreciatively.

Pearl Jam‘s Eddie Vedder fills in for Jim Morrison at the Doors set, and turns in an excellent performance that both complements what the three surviving Doors are doing and affords them respect. It too is well worth seeing and hearing.

But then you have Kid Rock joining Aerosmith. Somebody — it’s not clear if it’s Steven Tyler or Kid Rock — can’t friggin’ sing in tune. It’s painful to hear, and while Run-DMC showed that hip-hop can mesh well with some rock (at least Aerosmith’s brand of it), the wife beater-and-bowler white-trash nonsense doesn’t work. At all. It is — or should be — an embarrassment for all concerned.

Here’s the thing. These performances weren’t meant for broadcast. And to the compilers’ credit, the performances have not been “sweetened” in post-production. They’re here as they were there, warts and all. So for fans of the authentic, that’s a good thing. For casual audiences, perhaps not.

The videos hit some of the highlights from the last 24 years of Rock and Roll Hall of Fame ceremonies. And some things are predictable. Bruce Springsteen seems to be onstage and in camera range 99% of the time. Billy Joel — a fine and immensely talented musician and composer – proves once again that he can not rock, not at all.  Bono has a lot on his mind, and he wants to share it with you. Metallica sucks. Keith Richards is incomprehensible. And of course, Paul Shaffer is Paul Shaffer.

In face the ubiquitous and unctuous Letterman sidekick is all over this video. It’s true that these events do need a “house band,” and frankly, who else would you call? Paul Williams maybe? And honestly it’s a hoot watching Shaffer try to direct the stage band through songs like “I Saw Her Standing There.” With one hand he’s playing his keytar — some of these shows are from the 80s, after all — and with the other he’s doing the one-four-five finger signal. And the band is getting it, sorta. But the unbelievably crowded stage full of those sauced stars…they’re not getting it. You’ll hear harmony lines without lead vocals. You’ll hear responses without calls. You’ll hear, mostly, disastrous, shambolic performances. The purported thrill of seeing [pick any three random living rock legends] onstage together is mitigated — or in some cases completely negated — by hearing what they come up with.

Sadly, some of the Hall of Fame’s most controversial moments have been left off, or dealt with in such a cursory manner as to make it seem that everything was okay. Not included, for example, is Beach Boy Mike Love‘s infamous (drunken?) 1988 speech in which he delivered such immortal lines as these: “The Beach Boys have continued to do, about…180 performances last year. I’d like to see the Mop-Tops match that!” And then he claims that Mick Jagger had “always been chickenshit to get on stage with the Beach Boys.” And though John Fogerty accepted the award along with his former Creedence Clearwater Revival bandmates, he subsequently got onstage and played CCR songs…without them. (They were pissed, having been led to expect otherwise.) But to be fair, for most people, how entertaining would all that be?

All that said, it’s fun stuff. And there are some excellent performances (Cream, for example) and some good ones (some of the seeming endless string of Crosby Stills and Nash numbers). And some of the speeches are moving, entertaining or disarmingly funny. Primarily a purchase for the collector set, this is one item that most casual rock fans would probably prefer to rent from their local (independent!) video rental store.

For the really hardcore among you — sit down for this, please — there’s also an eleven-DVD set. Yikes.