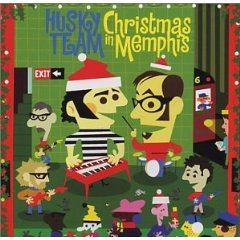 Way back in ancient history (well, late 2002) a bunch of friends and musicians dubbed themselves Husky Team and got together for a quick, one-off project: recording a bunch of holiday classics with a twist. What they did and who they are make this a worthwhile departure from the normal let-it-snow Christmas collections that come out (or get re-released) every year.

What they did is this: they cleverly arranged all of the tunes in the classic Memphis style. They managed to make everything from the hymn “We Three Kings” to the Beach Boys’ “The Man With All the Toys” sound like, well, like Booker T & the MGs. Have fun trying to spot what other well-known songs are referenced in these lovely tracks. You’ll hear some Box Tops, to name just one. The songs are deftly played with just the right amount of winking-we’re-having-fun attitude.

Who they are is also well worth noting. The project instigators call themselves Husky Team, but they’re really Dennis Diken (drummer/vocalist from the Smithereens) and Dave Amels (keyboardist for Reigning Sound). This nearly overdub-free, live-in-the-studio effort includes a powerpop who’s-who supporting cast: legendary underground popmeister R. Stevie Moore and endlessly cool powerpop tunesmith Richard X. Heyman. And some other cool guys too.

Who says Holiday music has to be the same stuff year after year? Christmas in Memphis is a fun album, although if you play it in September (as I did) you’ll get some odd looks from passers-by.