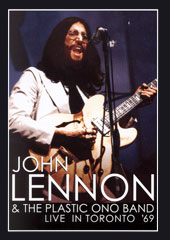 In 1988 the D.A. Pennebaker-directed Sweet Toronto concert film was released. Its appearance at that late date — the concert had taken place nearly twenty years earlier — was itself somewhat odd. The market being what it is, many opportunities to release the film to significant publicity had come and gone. John Lennon, the primary musician featured in the film, had been dead nearly eight years. Still, any concert film from Pennebaker (renowned for his work on Monterey Pop as well as many other works) is worthwhile.

The film showed Lennon’s concert debut without the Beatles. While the Beatles were still technically a group, John was bristling to get out on his own. A request from promoter Ritchie Yorke (who pens a reminiscence of the event in the DVD’s liner notes) was the excuse Lennon needed. He put together an ad hoc band including Eric Clapton (Cream, Blind Faith), old friend Klaus Voormann (former bassist for Manfred Mann) and Alan White (future drummer for Yes) and, of course, Yoko.

The group rehearsed some oldies on the flight over from England, and arrived in Toronto to take the stage following short sets by a number of giants from rock’s early days (Bo Diddley, Chuck Berry, Little Richard, Jerry Lee Lewis).

Sweet Toronto never went into wide distribution; it showed up as an occasional midnight movie, screened on cable a few times, and was released on video. The cinema verite quality of the film made for an exciting experience, and the rare sight of Lennon onstage without the Beatles took on a greater significance after his death.

Pennebaker’s team clearly shot a lot of film. And so in 2009 those outtakes are finding release in various forms. Berry’s and Lewis’ sets came out as free-standing films. Most recently, Little Richard’s stunning set came out on DVD. Now we have an edited version of Sweet Toronto retitled John Lennon & the Plastic Ono Band Live in Toronto ’69. The film is largely the Sweet Toronto movie — with its six songs by Lennon and band, plus two avant-garde numbers featuring Yoko on vocals — with a few tweaks. The original film’s Chuck Berry number (“Johnny B. Goode”) was cut. And some atmospheric scenes of the crowd were trimmed. Sweet Toronto ran 70 minutes, and the new DVD runs a mere fifty.

The disc does include a brief interview with Yoko Ono from 1988. While it has precious little to do with the accompanying concert film, Yoko is always an interesting interview subject.

As the concert film starts, the original Sweet Toronto titles remain. The camerawork is peerless (this is true of anything with Pennebaker’s name attached to it) and the sound is surprisingly good for an outdoor festival in 1969. The legendary Plastic Ono Band performance (itself released in audio on on Apple vinyl in the early 70s, and set for re-release on Shout! Factory CD) is fascinating; while they stick mostly to the oldies they know, the songs are given unique readings.

The band kicks in with Carl Perkins‘ “Blue Suede Shoes,” and while it’s sloppy, it’s pure rock and roll. “Money” is taken at a turgid pace more akin to how Black Sabbath might have performed it, yet it works. On “Dizzy Miss Lizzy” Lennon forgets the lyrics (a frequent problem of his; he often forgot the words to his own songs) but charges on in what ends up being the disc’s highlight. The band turns in a heavy reading of the Beatles’ tune “Yer Blues”; Lennon had performed this song a year earlier in the (then-unreleased) Rolling Stones Rock and Roll Circus film, featuring Clapton plus Mitch Mitchell on drums and Keith Richards on bass. At this point in the concert, Yoko’s mic is turned up, and her odd trademark warbling becomes an integral (inescapable?) part of the proceedings. A harrowing version of Lennon’s debut single “Cold Turkey” follows, with Yoko adding her unique vocalizations. And the band wraps up with a rock version of “Give Peace a Chance” (again, John loses some of the words). Yoko then takes center stage for two odd, feedback-drenched numbers. Those have actually worn fairly well, and can now been seen as influential works.

Throughout, John looks both nervous and thrilled to be onstage. The concert was his first significant appearance in three years, and there wouldn’t be all that many in the remaining eleven years of his life. Clapton is in fine form, though he’s his usual not-that-exciting-to-watch self. Voormann and White hold things down in a workmanlike manner. Lennon does betray a bit of annoyance with the crowd; at the tail-end of the petering-out “Cold Turkey,” he mumbles in disgust to the crowd, “Come, on, wake up.”

Setting aside the question of why this set has been edited and re-titled (something to do with licensing and Chuck Berry, perhaps?), it’s worthwhile for general rock fans and essential viewing for fans of John Lennon. With the video that is actually titled Sweet Toronto out of print, this is the one to get.