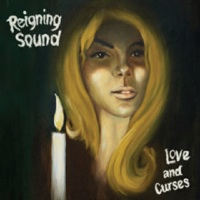 Don’t be put off by the packaging. Love and Curses, the 2009 album from keepers of the rock-n-roll flame Reigning Sound, is a fine record. But be warned that the songs don’t always reveal their charms on first listen. Give it time, though, and you’ll be rewarded.

The album’s opener “Brake It” goes right for the jugular, putting forth an R&B-meets-punk arrangement replete with organ straight outta church. “Trash Talk” takes an equally straightforward path, with minor-key flavors that teeter between 60s garage and spaghetti western feel. But guitarist Greg Cartwright’s vocal delivery keeps things plenty gritty. “Call Me” sounds like King Khan & BBQ with a full band (including that insistent organ). This is the sort of sound those gobbing Black Lips kids wish they could credibly produce.

“The Bells” is the closest thing to a pop song on Love and Curses. The insistent “If I Can’t Come Back” is just barely in tune, an aesthetic that suits the edge-of-chaos song perfectly. “Something to Hold Onto” is almost a ballad, featuring more immediate subtlety that you’ll find elsewhere on the disc. The aptly titled “Dangerous Game” pounds along at a breakneck pace. The height of “Debris” is its guitar solo.

“Stick Up for Me” comes the closest to conjuring up the garage-punk spirit of ’66; imagine the Chocolate Watch Band on speed. Like all of the songs on Love and Curses, it features Cartwright’s raspy, cigarette-stained vocals; a few of the songs feature backing and/or harmony vocals, but not many. “Love Won’t Leave You a Song” moves back into ballad territory; the arrangement features whistling organ and what sounds almost like tack piano; they’re very effective and an underpinning for a brief Leslie’d guitar solo. “Polly Anne” sounds like Reigning Sound meeting Dylan and Cobain for a hootenanny.

“Is it True” shows that Reigning Sound haven’t run out of energy near the end of their disc; the song’s backing harmony vocals leave this listener wanting more throughout the album. There’s little doubt that these songs get played l-o-u-d onstage; it’s impossible to imagine a track like “Is it True” at anything less than ear-splitting volume.

The album closer is a weird one. “Banker and a Liar” features a sounds that’s — I dunno — Greek? Moroccan? Albanian? Lebanese? David Lindley? Whatever it is, it works. Harmonium and a see-saw beat produce a track unlike like anything else on Love and Curses. The Memphis influence is totally absent here; save for Cartwright’s distinctive vocals, this could be anybody. Well, anybody who plays Eastern European styled rock and roll.

Cartwright is a celebrated record collector, and it’s clear that he’s absorbed the influences from within those vintage vinyl grooves, with an especially strong feel for the Memphis style. The arrangements are tight and assured, but at every moment the band sounds like they’re about to fall apart. But they don’t, not ever. Imagine the Replacements if they came up in the south instead of Minneapolis.

The organ is a key component in the Reigning Sound sonic assault. Though it’s not always mixed to the fore, the keyboard work of newest member Dave Amels (a frequent Dennis Diken collaborator) makes the songs much more than they’d otherwise be. Dave Gay’s bass — a left-handed Rickenbacker 4001 — does its bit so successfully that it’s more felt than heard. Lance Wille‘s drumming is steady and never overplays; Wille has a keen sense of each song’s demands; he’s never afraid to throw in a series of fills — listen to “Broken Things” for proof — but it’s nearly impossible to imagine him taking a drum solo.

But the packaging! From the uncredited yet weirdly-folk-arty cover painting to the band photos, it’s — quite honestly — visually unappealing. (Going by the photos, if you bumped into any of these guys in an alley, you’d be a bit concerned; in real life, they’re not so scary. Well, ok, most of them aren’t.) A creepy inset photo of something — a wax doll? Unknown Hinson? Can’t be sure — is as bereft of context as the cover painting. But again, don’t let all that scare you away. This is rock and roll.