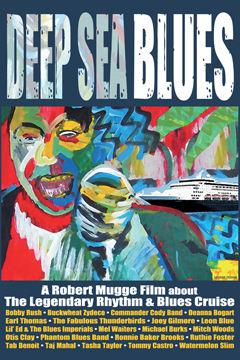 In some ways, the pairing of blues and leisure cruise is an odd one. Even under normal circumstances, it takes some coin to board a cruise ship, and if said ship is filled with high-quality blues artists performing nearly nonstop, it likely costs even more. A cynic might expect such an event to be populated, then, by wealthy dilettantes. Well, if that were the case, Mugge’s camerawork and editing manage to downplay it. What we see in Deep Sea Blues is a ship full of true blues lovers.

The film manages to convey the impression — and we can only assume it’s an accurate one — that the wall between performer and audience is broken down on the cruise. We see artists interacting with guests, and guests (in interviews for the film) dropping names of blues artists like they’re old buddies.

And in many cases they are. The 2007 cruise wasn’t the first; throughout various artists and guests talk about how many of these trips they’ve made. Kim Wilson, leader of the Fabulous Thunderbirds, goes so far as to joke that by now there’s probably a “secret handshake” for repeat cruisers; he points out that fans at land-based gigs often approach him and say “see you in January”.

Mugge has a keen eye and ear, and the editing and pacing are excellent. The film manages to convey the wide array of musical styles included on board, and Mugge seems to know instinctively how long to linger on a particular artist before cutting away for an interview, or moving on to the next scene.

The sound, too, is excellent, and Mugge seems to know this: the cruise’s chief sound tech Dawn Hopkins is portrayed onscreen as a hero of the project, and rightly so. A fair amount of time is spent covering cruise organizer Roger Naber; while as prime mover he’s certainly relevant, his significant screen time brings the tone of Deep Sea Blues perilously close to becoming a program-length commercial for the cruise. (Or a super-high quality variation on one of those commemorative videos they try to sell guests on their way off the ship.)

Luckily, of course, there’s the music. The film-proper doesn’t offer up too many complete song performances, but the viewer is left with a pretty good sense of what’s offered. Highlights include Earl Thomas with Michael Rasmussen (vocal and electric guitar, and nothing else — superb!); Lil’ Ed and the Blues Imperials (high powered Chicago style blues); Tasha Taylor; Mitch Woods (with members of Fats Domino‘s band, including a very old but fleet-fingered lead guitarist); Kim Wilson’s solo blues harp spot; and Tommy Castro. But every blues fan will have his or her own favorites, and that’s a big part of the appeal of this film (and of the cruise itself).

Deep Sea Blues isn’t perfect. The Taj Mahal cooking show clips are an odd juxtaposition, as is the time spent glorifying the story of Shamat, a stowaway and erstwhile performer (can I stow away too?). And the few oddly slight musical performances (Commander Cody, for example) are the weak spots in an otherwise consistently entertaining film. The beach wedding of uberfan Dick Waterman is oddly endearing, though: the bluesman preacher’s invocation is not to be missed.

The stories related by some of the blues artists (and managers, and emcees) are almost worth the price of admission. Moving, funny and memorable, those reminiscences (often about musical colleagues who have died) are part of a rich oral history. Much like the blues itself.