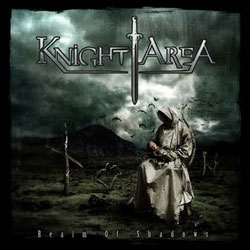 How come the most interesting sounds in modern progressive rock are coming from the continent? While the USA has Dream Theater, far more fascinating acts from the UK and Europe are turning out compelling music that flies in the face of “prog is long past its sell-by date” conventional wisdom arguments. The latest case in point: Dutch quintet (formerly anything from a one-man project to a nine-piece) Knight Area. Their Realm of Shadows — released October 2009 — shows that there’s plenty of life left in the oft-maligned genre. Yes, the cover art is spooky, monochromatic and foreboding. But open the jewel case, pop out the disc and you’ll see something a bit jarring: the photos of the band members. Two of the guys are wearing broad smiles, and the other three don’t have that dour who-peed-in-my-cornflakes look, either. Something’s amiss! Might Knight Area subscribe to the idea that prog need not be self-important to be worthwhile? The sonic evidence strongly suggests that’s the case.

The intro “Antagony” sounds like something classic-lineup Asia would have done. And — I actually mean this in a good way — the insistent beat in sections of the song brings to mind Journey‘s “Separate Ways”. All the hallmarks of progressive rock are evident on Realm of Shadows: you’ll get your meter changes, your Mellotron, your conceptual story line. But all of those elements are applied judiciously. Unlike garden-variety prog, the results aren’t overwrought.

The punchy bass lines of Gijs Koopman betray a strong affinity for the style of Yes’ Chris Squire; in most rock subgenres, having a bassist play like a (frustrated) lead guitarist end up being a detriment. In this case it works quite well, adding an additional melody line of sorts to the music. Vocalist Mark Smit has a pleasing voice; it’s a bit like Geddy Lee without that Donald Duck-on-helium quiver, and Smit manages to convey emotion without going (on one hand) thuggish or (on the other) over the top.

The nimble and lyrical keyboardist Kerben Klazinga makes what to this listener is a most unusual sonic choice: the piano tones on the sweeping album opener “Ethereal” are unmistakably that of the very 80s-sounding Yamaha CP70 digital piano. So while the music isn’t tied to that era, the piano sound is. Judging from the music palette applied to the album as a whole, it was a conscious decision, not a case of this-is-all-we-got.

I’ve heard Knight Area compared to Dream Theater, but I don’t hear it. (and if you’ve read my concert review of a DT show, you’ll understand that I’m glad I don’t.) I do hear hints of Gabriel-era Genesis, a bit of Kansas. Strong melodies abound, and prog-metal screaming is delightfully absent. Analog solo-note synthesizer lines are effectively used as a lead instrument throughout, but there’s plenty of guitar pyrotechnics courtesy of Mark Vermeule.

And in a radical move that might threaten to get Knight Area’s prog license revoked, the band delivers two songs that clock in at well under three minutes each. The eleven-plus minute album closer “Occlusion” offsets things. “Occlusion” opens like something from a Lord of the Rings-style soundtrack, and unfolds slowly; hints of Grobschnitt crop up here and there. There’s even a brief country-styled lick that sounds like pedal steel guitar; surprisingly, it works, and leads right into a majestic synthesizer solo laid carefully atop a Mellotron choir. The final minute of Realm of Shadows is all atmospherics; it’s evocative of the band finishing a concert and descending into the mists like some Nordic spectres. Effective stuff; if your player is set on repeat, the opening of “Ethereal” features a snippet of those sounds, creating a cyclical effect. Done before? Sure. But if it works, it works.

The album art suggests a dark journey, and certainly the lyrics deal with the usual prog tropes (quests, the unknown, tears) but this is musically pretty upbeat stuff. These must be some pretty well-adjusted guys: when Knight Area takes a leaf from the gospel according to King Crimson, they manage to do it without going all humorless.

While the song structures and instrumentation are quite classicist, the production is very contemporary (especially the thunderous bass lines on tracks like “Dark Souls”). Realm of Shadows strikes a delicate balance between sweet melodies (the kind that wouldn’t be totally out of place on an album like Styx‘s Equinox) and bone-crushing Moog Taurus lines that threaten to loosen the listener’s dental fillings. The playing is expert but not showy; one gets the sense that the guys in Knight Area are comfortable enough with their abilities so that they don’t feel the need to go all look-what-we-can-do on the hapless listener who merely wants a good prog melody.

In that sense and many others, Realm of Shadows delivers. Serving up lovely songs delivered with grace and power, Knight Area is a band to watch.