NOTE: In 2009 Noble Rot reissued three of Julian Lennon‘s albums. They didn’t reissue the Valotte debut, nor did they put out a new release of Photograph Smile, Julian’s 1999 album (and arguably the finest work he’s produced). Instead, this new label — in keeping with its reputation for unearthing underappreciated albums from the 80s and 90s such as those by Toy Matinee and Marc Bonilla — released digipack versions of The Secret Value of Daydreaming (1986), Mr. Jordan (1989) and 1991’s Help Yourself. Here’s the third in a series of five reviews. 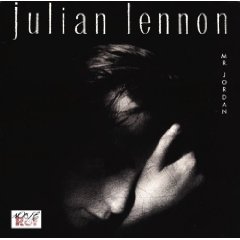 Three years after 1986’s The Secret Value of Daydreaming, Julian Lennon returned with Mr. Jordan (the title is a nod to the classic 1941 Claude Rains film Here Comes Mr. Jordan, itself remade as Warren Beatty’s Heaven Can Wait in 1978). This time production was handled by Pat Leonard, already a hot commodity based on his other production work (Madonna) and keyboard work (Ted Nugent, Stanley Clarke, the David Gilmour-led Pink Floyd). Leonard would go on to his own projects (Toy Matinee, 3rd Matinee) and more production (Marc Bonilla); all have been released on Noble Rot in 2009; that’s probably more than a coincidence.

But back to Mr. Jordan. From the opening drum figure and power chord, it’s clear that Mr. Jordan is no Valotte or Daydreaming. But what the hell is it? “Now You’re in Heaven” sounds unnervingly similar to the sounds David Bowie was putting on his albums during that time. But did anyone buy Tonight or Never Let Me Down? I sure didn’t, and I’m a Bowie fan (or was, up to that point).

The decision to channel the Thin White Duke is, in retrospect, quite an odd one. This album might have gone over well on its release; in fact the liner notes quote a Rolling Stone review of the era, making noises about Mr. Jordan helping to salvage Julian’s credibility.

And it’s not a bad album, not at all. It just doesn’t sound like Julian Lennon, whatever that means. (The world would have to wait until Photograph Smile to find out, by which time — sadly — few were listening.) Leonard tones down the keyboard and aims for a guitar-oriented radio-ready sound that serves Lennon well. But his voice…Julian sings in a lower register through much of the disc. On one hand, it does showcase his increasing range, but the album really doesn’t help establish Lennon with any sort of musical identity. Fans weren’t asking for an Oasis (“let’s release the same album six times in succession”) but neither did they sign on for a stylistic pinball machine like, um, David Bowie.

And some color on the album sleeve would be nice: Mr. Jordan, like the two albums before it, sported a black-and white cover. (The Help Yourself cover would finally add a few spalshes of color.)

“I Get Up” kicks off with helium female vocals and a high-energy arrangement, but then, that voice again. By this point, some waggish listeners might suggest Lennon should have titled this album Mr. Bowie. On the bridge and chorus he sounds like Julian again, but it’s just so…weird. The song’s pretty cool, though. For 1989, anyway. “Mother Mary” successfully merges the Valotte vibe with the new Julian, and works in some tasty cellos as well. It’s a highlight of the disc, and most likely to please those who enjoyed the first album and were left wondering where it all went off the rails. “Angillette” channels — for once — John Lennon. Not up to the quality of level of Julian’s dad’s work, it’s nonetheless a fine tune, one that finds Lennon back in familiar territory: sweeping piano ballads.

“Open Your Eyes” sports some jarring tempo changes, but once the listener acclimates to those, the song reveals some interesting production and arrangement choices. It’s easily the most musically compelling thing on Mr. Jordan, and deserving of a close listen. “Make it Up to You” suggests — albeit two-thirds of the way through Lennon’s third album — that he’s found his niche. Here he sounds like himself, and a little like his dad during the Walls and Bridges era. The chunky horns and female backing vocals are right in the pocket, and one supposes this number would have worked well live. The waltz “Sunday Morning” features some trumpets that sound like they were flown in from 1967, along with some nice classical instrumentation. But the too-modern keyboard sounds intrude on the pastoral tune, making it less satisfying that it might otherwise have been. “Second Time” sounds like an album closer (in a good way) and suggests that Lennon and Leonard front-loaded the Bowie-isms. But then the disc wraps up with “I Want You To Know.” By this point I didn’t want to know, and I didn’t want to hear any more “Blue Jean” -era Bowie influences.

But there’s more. An unlisted eleventh track — a brief bizarre time signature reworking of Chuck Berry‘s “Johnny B. Goode” — must be heard to be believed. This tantalizing taste suggested that there was more — much more — to Julian than his albums had yet revealed.

It’s understandable in this case why Noble Rot didn’t include musician credits: they would have had to use very small type. There are a lot of musicians on this disc. One minor complaint, though, and one that seems to hold true for several Noble Rot projects. It seems that the reissue label merely shot a photo of an LP cover rather than attempting to locate the original album art. The result is a slightly grainy, blurry finish to the reissue covers (though the cover of The Secret Value of Daydreaming looks okay).