Blast from the Past: Julian Lennon – Valotte

Note: In October 2009 Noble Rot reissued the second, third and fourth albums by Julian Lennon. While the first and fifth did not see re-release, it made sense to this writer to provide context by reviewing all five in chronological order. 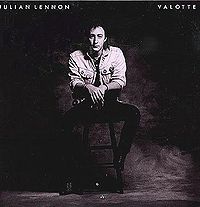 When Julian Lennon released Valotte in 1984, a lot of people were surprised. This writer — even then a hardcore Beatles fan and keen follower of Beatles news and trivia — was caught off guard, like a lot of Beatles fans. Yes, a nine-year-old Julian had made his recording debut on Dad’s Walls and Bridges cover of Lee Dorsey‘s “Ya Ya”, but that track was little more than a novelty, and didn’t represent a serious effort on anyone’s part.

So a decade later when the “Valotte” single was released — with a pic of the 20ish Julian bearing strong echoes of a famous Jurgen Vollmer photo of a 20ish John Lennon taken in Hamburg — a lot of us were a bit suspicious. No known musical background, and now an album?

But Julian Lennon’s debut LP was in fact quite good. Fully half of the record’s ten tracks were high-quality pop; the title track was a very atmospheric tune, strongly reminiscent of Julian’s dad’s work a decade earlier, and several other numbers (“On the Phone”, “Too Late for Goodbyes” “Say You’re Wrong” were memorable. And even the weaker tracks (some of which, admittedly, haven’t worn well) were ok; nothing was wretched. Julian wrote or co-wrote all the songs; moreover, he played a bit of keyboard and whatnot. Thus, his involvement with the project was at a level equal to that of many other pop acts.

A brief aside, if I may. I saw Julian Lennon in concert on June 1, 1986. He was playing at the amphitheatre at Six Flags Over Georgia, just outside Atlanta. The venue hosted a number of pretty-cool-for-an-amusement-park acts; I saw the Plimsouls and the Tubes there as well. Lennon and his band put on a winning set, and he conveyed a warm, engaging onstage personality. But the audience was there for “Valotte” and that alone. Once Lennon played his hit, a full two-thirds of the audience split for the nearby rollercoaster. Lennon gamely came back out and announced to the remaining fans that he’d play some more just for them (us, I mean). He proceeded to put on an entertaining show. I felt bad for him in a way, but too was I impressed by his professionalism. (The YouTube clip below is from a Japan concert of the era. Not bad…)

But a few months later, the real test, as it often is, would remain: could he follow up Valotte with a quality studio product? Coming up: a  look at Julian Lennon’s The Secret Value of Daydreaming, released in 1986 and reissued in 2009.