After the semi-disaster of Night #2 (I had missed Night #1 altogether) of the 2009 Charlotte Pop Fest, I was left wondering how things would go. Event impresario James Deem had come out onstage part-way through the Friday set to announce to the crowd (well, not a crowd; more like a gathering) that due to the nonstop rain — and forecast of more to come — Saturday’s outdoor performances would be moved indoors.

This didn’t bode well. A number of acts had been scheduled to perform outdoors as part of a multi-stage street festival already taking place in Charlotte that weekend. But the original schedule had some overlap between the end of the outdoor gigs and the start of the evening’s indoor festivities. Add to that the fact that Friday’s lineup was way behind schedule, owing (in my opinion) to poor stage-management, and you had a recipe for disaster. 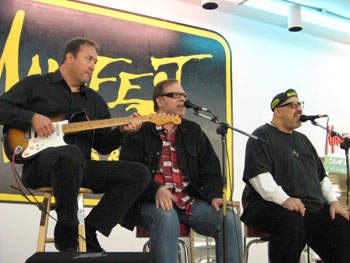 And to make matters even more complicated, the mighty Smithereens had an in-store performance scheduled for midday Saturday at the same time as other acts were supposed to be playing (either outdoors or indoors, depending on, well, y’know). An event that wasn’t drawing in the triple digits, spread across two or possibly three venues? Also not a good sign.

I knew where I’d be Saturday.

Manifest Discs is the sort of place you don’t see any more. It’s a huge (easily a few thousand square feet) record store. A real throwback to the glory days of rock music, Manifest features a huge vinyl section (new and used) where intrepid cratediggers could find new indie releases as well as good-condition copies of old Paul Revere & the Raiders LPs. The vast used CD section included a wide swath of genres, all fairly priced; the new CD section was also expansive. I didn’t even venture into the DVD department, but it was big as well.

At the back of the store, centrally located, a decent-sized permanent stage was set up. Well in advance of the scheduled noon start time, Pat DiNizio (guitar/vocals), Jim Babjak (guitar/vocals) and Dennis Diken (drums/vocals) had arrived. The format was pretty loose: the three original Smithereens mounted barstools and planned to play a short semi-unplugged set.

No tambourines, shakers or other percussion were in sight, so Dennis would be in charge of foot-stomping, clapping and harmony vocals. The loaner acoustic guitar designated for Jim Babjak (belonging, I think, to James Deem) had some wiring trouble, so he ended up using a spare Stratocaster belonging to DiNizio. Pat didn’t play an instrument either; he’d focus on singing. As Diken told me before they started the set, bassist Severo “The Thrilla” Jornacion wouldn’t be joining them for this informal set, as he had picked up a support gig with one of the other acts. 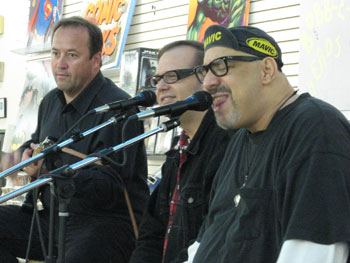 The gathered group of 20-25 fans enjoyed a delightfully intimate set running about 30 minutes. The three solicited requests from the fans, and did their best to oblige when the requests made sense and fit the limited format. Songs like “Only a Memory” worked amazingly well in the single-guitar-and-harmony-vocal format, proving once again that a great song is a great song in any style.

The group’s easygoing, engaging banter carried the day. When some of the requests leaned toward the heavier end of things, Diken said, “What we’re trying to do — since we’re so naked up here — we’d like to do some things that have more harmonies.” I called out for a personal favorite, Blow Up‘s “Now and Then.” Dennis Diken paused and replied, “That’s one we haven’t rehearsed in a while. But that does have some good harmonies on it.” He paused again for effect. “I guess we’re done.” The crowd burst into laughter.

Taking a page from the Unplugged format, Diken, DiNizio and Babjak took turns providing back-story anecdotes to many of the songs, something that I figured was a rare treat; they certainly couldn’t do that in a “rock” show without diminishing the flow, right? (I would — happily — be proven wrong later that night.) Of particular interest was DiNizio’s story about the origins of “Behind the Wall of Sleep”. And the song’s longish guitar solo, courtesy of Babjak — was a real treat as well. 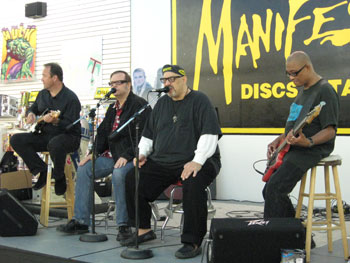 “The Thrilla” did in fact arrive near the end of the set; he was subjected to good-natured razzing from his bandmates for his late arrival. Dennis Diken waggishly introduced him: “Ladies and gentlemen, Larry Ramos.” The crowd dutifully applauded, most not catching the joke. (Hawaii-born Larry Ramos joined pop vocal group The Association in 1967 and still tours with the group. Jornacion is from the Phillipines.) Jornacion’s arrival allowed the Smithereens to close their set with the bass-heavy “Blood and Roses”, their earliest hit. Diken took turns with DiNizio on lead vocals, something the group can’t easily do in their usual electric format.

After the set, the Smithereens spent leisurely time meeting every one of the people who came along to see them, and then they scoured the racks for good deals on CDs and vinyl.

Seeing the Smithereens up close and personal would be an experience difficult to top. Or so I thought.

Coming soon: review of the Smithereens show at Night #3 of the 2009 Charlotte Pop Fest. 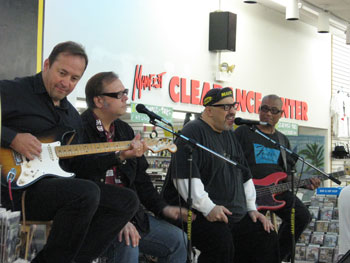