Nina Persson is possessed of a voice that’s at once icy and removed, emotive and sensual. As vocalist for the Cardigans, her pipes floated over their gimmicky-but-good arrangements. But A Camp is a different matter altogether. 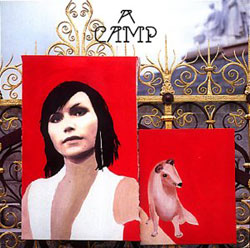 There’s still that dichotomy, causing tension and resolution on every track. The group’s second album Colonia was released to near-universal acclaim in April 2009. A brief US tour followed, including radio dates. A daringly ambitious album, Colonia drew on girl-group, Brecht-Weill and much more for inspiration, and did so in an incredibly catchy way.

In the wake of Colonia’s success, the Swedish group’s first (self-titled) album has now reached American shores. This 2001 debut (winner of a Swedish Grammy®) is very much of a piece with Colonia, and is strongly recommended to anyone who enjoys that album. There’s nothing quite as immediately winning as “Stronger Than Jesus” or “My America”, but the album reveals its charms quickly enough, for an experience that’s ultimately nothing short of transcendent. A Camp‘s “I Can Buy You” has the way-out-front vocals and arrangement flourishes (subtle harmonica, for example) that would help make Colonia such a fully-realized album.

A Camp doesn’t often rock, but then it’s not meant to. Yet the playing throughout makes the clear if unstated case that “yes, we could rock if we chose to.” And when they do rock (check out the psychedelic “The Oddness of the Lord” for proof) they do so convincingly. The playing is always in service of the song, and the spaces between the notes (and they exist aplenty) are every bit as important as the notes themselves. This is very carefully — painstakingly, even — thought-out music, yet it’s full of feeling. There’s a very subtle decadent air about the songs on A Camp (more subtle than on the sophomore album — but the music remains beautiful. “Song for the Leftovers” is a highlight, driven by vibrato Wurlitzer Electric Piano and an understated string arrangement, and daubed with carefully-placed trumpet licks.

The odd — even by A Camp standards — “Walking the Cow” again features the Wurly, but adds a strange, gurgling synthesizer (a few in fact) and then — wait for it — rocks out in places. Then just when you start tapping your foot, the beat drops out, replaced by some scratchy sounds more at home on a Radiohead album. Amazingly, it works. The aptly-named “Hard as a Stone” really does rock; it features ever-so-slightly overdriven vocals from Persson; it’s an excellent track with hit potential, but the crazed, amphetamine drumming and guitars are not really representative of the remainder of A Camp’s output. “Algebra” incorporates classic 60s pop elements into its straightforward arrangement. The spooky “Silent Night” (most definitely not the holiday classic) layers Persson’s vocals on top of a creepy synth-flute bed (Mellotron? maybe), and dots the song with acoustic piano, glockenspiel, pedal steel, and any number of other wonderful instruments. Not one of them overpowers the other; it’s a placid number evocative of a perfectly still lake. The over-modulated electric guitar on the misleadingly-named “The Same Old Song” is quite tasty, leaving the listener wanting more. And that track’s acid-jazz influenced horns add clever filigree.

A Camp achieves a lovely synthesis of classicism and modernity. While Persson’s voice is always the central instrument, there’s a lot of very interesting stuff going on with the instruments; a careful listening of A Camp will pay handsome rewards.

What the group did exceedingly well on their debut, they perfected on the followup. All of the fourteen songs on A Camp are short, succinct yet well-developed pop numbers. Anyone who enjoys soft yet adventurous pop would do well to check out this album. And if you like it, you’ve simply got to pick up Colonia as well.