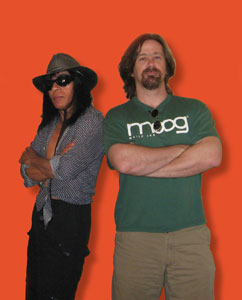 In April 2008 I was fortunate to score an in-depth, in-person interview with Question Mark, leader of ? and the Mysterians. I wrote a long piece based on that interview; that feature will be published in an upcoming issue of Shindig! Magazine. What didn’t make that feature, though, were the scores off ofhand tangents which QM made throughout our interview. He offered (generally unsolicited) comments on any number of well-known personalities. In many cases his views are based on knowing these people well; in other cases his frustration is borne of lack of access. But in all cases it’s weird and amusing in a can’t-look-away-from-the-car-crash kind of way. It is my hope that the reader won’t come away from reading this with the idea that QM is a mean-spirited individual; that’s not at all the impression I got in person. A bit catty, perhaps. Enjoy. — BK

“And he comes into town. We all partied down. He’s on the bed, singing, ‘you’re gonna cry, cry cry cry cry, 96 tears.’ Right? See, everybody uses us to get the recognition…they use us as…when they got influence. Whatever. But after that, you don’t hear from ’em no more. Right?”

ON CONWAY TWITTY AND LORETTA LYNN: “Yeah. We write our music so anybody can take it and do ’em country, do ’em reggae, do ’em blues, do whatever. Like I said, if it’s ever done country–I’ve been saying this for a long time– if anybody ever did “96 Tears” country, it would be Conway Twitty and Loretta Lynn. That comes to my mind. Well…Conway Twitty’s dead, right? But Hey! I’m alive! Me and Loretta could still do the song. Hello?”

ON THE WHITE STRIPES: “They opened for us in ’97, and actually Jack came up to me–he didn’t have his hairdo they way he does now–it was more like Troy Donahue or whatever.”

ON MEAT LOAF: “We brought him back to Michigan before he even started in the Rocky Horror Show. And that movie about him that they showed on VH1. They didn’t mention us. Nobody ever mentions us. Meat Loaf. And he was playing in Popcorn Blizzard in Saginaw, right? And he was playing rock and roll, not all these things he wrote with [Jim Steinman]. I never liked that music. But that’s another story. But anyways, we’re with Capitol Records, and the Yardbirds are in town at Huntington, so we’re recording our third album, and we go there and jam. And Meat Loaf walks in. He never wore pants and belt. He all the time had overalls. I mean, he stood with us. He slept with us. He ate with us. And everything. He said, ‘well, Question Mark, how do you “make it?”‘ And I said, ‘Well, if you give up, how CAN you make it?’ Common sense will tell you. And then when he went downhill, [contemplated] suicide, right? And I thought, ‘Well, maybe he thought about what I said: If you give up, how can you make it?’ Right? Well, ten years later, right? Bat Out of Hell. And the movie, I saw it. Never mentioned us. He mentions us, like in a paragraph, in his book.”

ON TONY ORLANDO: “He sang on our first album, background. “Why Me?” That’s him singing. He was in the dumps. People forgot about him. We drove him back to Brooklyn, or wherever he lived, in our limo when we were in New York, right? But I heard he was doing…sweeping the hallways or whatever. I said, ‘Tony Orlando’s here? Tell him to come in here and sing harmonies.’ And that’s him on the album. But he never talks about us. Everybody that made it after us…right? I try to get ahold of ’em just to get a spot in their show.”

ON CAPITOL RECORDS: “We were doing our third album, at Capitol Records. That was in ’68 when Robert Kennedy got killed. And we were recording at Ray Charles’ studio. And yet I called ’em five years ago –’cause they don’t own the master tapes, right? They don’t wanna sell ’em back to me. They don’t want to do nothin’ with the recording. That’s our third album. I had the Raylettes on there.”

ON ALLEN KLEIN: “We got frozen in time because of Cameo Parkway screwing everybody and Allen Klein taking over. Manipulating the stocks and all that kind of stuff, right? So we got tooken [sic]. I’m still getting taken by them.”

ON THE ROLLING STONES: “April of 1998. Three pages [in Rolling Stone] on the Rolling Stones, why they didn’t want a longer tour, they want shorter sets. And I said, ‘they’re getting…old.’ January 19th — there was a rumor that Mick Jagger was there when we played at Coney Island High, the club. And so everybody was lookin’ around seein’ if he was there. They were in town at Madison Square Garden. I was gonna let everyone know, ‘we ARE the rock and roll band of the world, NOT the Rolling Stones.’ and I do claim the title, you know, for our band. And I am the world’s greatest entertainer; I claim that title, too. I can back every claim I do. And when I do, you realize, ‘M-hm, you got somethin’ goin’.'”

ON MICHAEL JACKSON: “Like I said, Michael Jackson — he writes a lot of his songs, but he has people showing him how to dance, how to move to his songs. Let’s see you dance to your own songs! I mean, don’t you… Let me feel your music. So, you call that a great entertainer? Not when you’re paying people to… Okay. I’m going to pay people to show me how to dance, how to move to my music? Yeah, but people don’t think about that. And they put him on a pedestal like that, right? And I said, ‘I never saw Michael Jackson dance on his own.’ First time I saw him on clips he was doin’ James Brown. So what does that say? I never saw the real Michael Jackson. You see it on TV and everybody goes wild. The moon walk: he didn’t create that. Some caucasian dude showed him how to do the steps!”

ON JAMES BROWN: “You gotta work the stage. You can’t stand in one place. Now, James Brown, whenever you saw him, he stood in one place. I never seen him working the whole stage, and that kinda stuff. Number after number, right? And like I said, when I do ‘Try Me,’ like I’ll do tonight, I say that ‘I’m gonna do a song by one of the hardest working men in show business.’ Of course I wanted him to hear me do ‘Try Me,’ you know, but he’s not around here.”

ON BUDDY HOLLY: Anyways, but like I said. Buddy Holly, then Buddy Holly died, right? And I hate all these clichés said “that’s when the music died.” Shoot, I was writin’ songs.”

ON BOB DYLAN: I never liked Bob Dylan; I didn’t think he was all that hot. For one thing, he didn’t really write music; it was just like going in one straight line, and just connecting line after line that don’t really mean anything. But other people took his songs — like Jimi Hendrix [laughs] — ‘All Along the Watchtower’ — and made some music out of it. A few people heard me say that, and said ‘I’m glad to hear finally somebody say that about Bob Dylan, because everybody has to agree, like “oh, he’s a genius” and all that, you know?’ I never liked his music.”