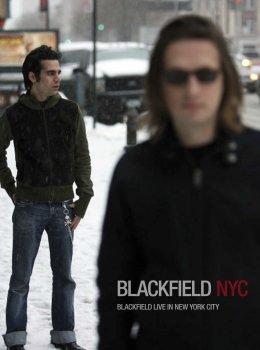 Live in New York City is the first live offering from Blackfield, the collaborative effort between England’s Steven Wilson and Israeli Aviv Geffen. With two albums in their back catalogue (2005’s self-titled album and 2007’s Blackfield II) the time was right to release this concert album, recorded around the time of Blackfield II‘s release. The show was performed at NYC’s Bowery Ballroom in front of throngs of adoring fans. “Christenings” and “Pain” are both close cousins to “Last Chance to Evacuate Planet Earth Before It is Recycled” from Porcupine Tree‘s 2000 release Lightbulb Sun, and except for Aviv Geffen’s slightly distracting Israeli accent, either or both tunes would sit comfortably on that album. But in general, the musical territory explored by Blackfield stays safely in the mainstream rock genre.

And that’s not a bad thing, not at all. Wilson exercises his prog instincts quite well in Porcupine Tree. A prolific writer, composer and performer, Wilson has too many ideas for one band. So rather than cram them in anyway, he’s pursued multiple simultaneous projects, and Blackfield is the most accessible of these. Why this music doesn’t get a hearing on modern rock radio (or active rock, or whatever stupid label is applied these days) is something of a mystery. Strong melodies, melodramatic arrangements, plenty of dynamics, and evocative lyrics are the hallmarks of Blackfield’s recorded output. And while live albums are sometimes contractual-obligation maneuvers, in Blackfield’s case the live album is superior to either of the studio albums.

Blackfield executes a bizarre left turn with the inclusion of Alanis Morissette‘s “Thankyou.” A bigger surprise is that the track works, and well. Wilson’s plaintive voice soars over an elegiac piano-and-strings backing, creating a moving performance in the process. In contrast the most of Blackfield’s songs, “Thankyou” conveys sadness and resignation in its notes; most Blackfield songs — while lyrically dark — feature upbeat arrangements. Placed in the middle of the set, the detour serves the band well.

The anthemic “End of the World,” is, paradoxically, a lyrically hopeful song. And it’s deliberately-paced, like much of Blackfield’s work. With the exception of some parts of “Open Mind,” the songs never really get into aggressive, foot-stomping territory. This is tuneful, sing-along mainstream rock (and here I mean “mainstream” in a good way, as in, accessible.

Geffen’s voice is perhaps better suited to harmony parts than lead vocals; his guttural middle-eastern inflection (“drifting” is pronounced more like “dreefting”) does occasionally distract from the music. But perhaps (well, no “perhaps” about it) that’s a Western bias on the part of this listener. He’s a good enough singer, but it’s difficult for a Westerner to judge his singing on the merits. In any event, Steven Wilson handles the majority of lead vocals, and Geffen’s lower register applies a lot of color to the vocal harmony arrangements.

The concert (provided as both an audio CD and a concert DVD) is filmed and edited in a pleasing, dynamic fashion. The band is reasonably interesting to watch; while they sound a bit like Porcupine Tree, their onstage persona is quite different. Aviv Geffen looks to be a bit younger than the rest of the lot, but seeing him with his Rickenbacker guitar adds a traditionalist vibe. Most viewers could probably do without Geffen’s shirt removal near the end of the show (Wilson, of course, is far too serious for such theatrics) but the antics don’t really detract from what is an excellent performance. One punter in the audience shouts out a futile request for Porcupine Tree’s “Arriving Somehwere But Not Here” and is, of course, ignored.

For those new to Blackfield’s work, Live in New York City is highly recommended as the ideal entry point. Even if you don’t know Porcupine Tree’s music (if, say, you’re not into the progressive end of rock) this is still a very worthwhile collection, of likely interest to fans of Pink Floyd and similar midtempo-yet-compelling rock. Pick this up, and enjoy the show.