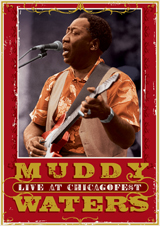 Muddy Waters Live at ChicagoFest is a 1981 performance of the master bluesman onstage. The concert — filmed at Chicago’s famous Navy Pier — features Muddy with his band and some Very Special Guests. Chicago takes its blues very seriously, and the packed crowd at Navy Pier is no exception; Muddy enjoys an enthusiastic and well-earned reception. Muddy wastes no time getting right down to business; rather than saving it until excitement builds, he launches right into his trademark “Mannish Boy.”

The good news: well, it’s Muddy Waters. And that, in and of itself, is enough. And the appearance of guitar slinger Johnny Winter always adds value to the proceedings (that Woke Up and Found Myself Dead fiasco with Hendrix and Jim Morrison notwithstanding). But a conscientious review of this DVD cannot sidestep some criticisms.

First of all, the program has that peculiar look so common to locally-produced programs of the era. Shot on videotape, it — unlike the music performed — is inextricably tied to its era. While the camerawork is professional, gimmicky production tricks like switching to black-and-white detract from the show (or at least they do now; in 1981, perhaps not so much). All that’s missing is the dreaded laser posterization (you’d know it if you saw it).

Occasionally, the camerawork is off-base. On “Going Down Slow,” the camera lingers on close-ups of Muddy and Winter while an off-camera guitarist plays a fine lead guitar solo. This calls to mind those ham-handed TV moments of the 1960s when viewers would see an extreme close-up of, say, the bass player’s hands during a guitar solo.

The band is nothing special, and the liner notes tacitly acknowledge this. While it’s true — as the informative liner notes relate — that Muddy Waters put the band together in less than a week (the old band quit), this bunch of players is competent, and little more. Chugging along on Muddy’s mid-tempo blues, they play like journeymen: up to the task at hand, certainly not phoning it in, but unlikely to shine.

Muddy himself was getting on in years; here he’s nowhere nearly as animated as onstage at the Last Waltz concerts five years earlier. He remains mostly seated, and for all the talk about his guitar playing, there’s not all that much of it to see or hear on this disc. Muddy’s heartfelt yet primitive guitar runs — most notably on “She’s Nineteen Years Old” — are worth seeing, but not exactly the stuff legends are made of. And when Muddy’s not soloing (at least on this night) he’s actually doing quite little at all on the guitar.

Yet, by no means is Muddy Waters Live at ChicagoFest a dud. The guest vocalists on “Five Long Years” are a delight, especially when they improvise lyrics in front of an appreciative audience. And Winter’s guitar licks are as fiery as ever.

After 56 minutes — there are no bonus materials on this disc — it’s all over. But just before that, the brief concert wraps up with a energetic reading of “Got My Mojo Working,” featuring blistering harp work from (appropriately enough) Mojo Buford, the sole holdover from Muddy’s previous band.

Final verdict: entertaining but not essential addition to the collector’s shelf.