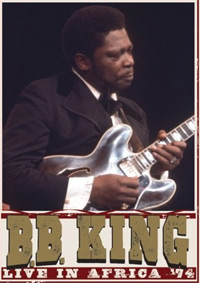 Presumably made up from outtakes from the filming of Leon Gast‘s When We Were Kings, B.B. King Live in Africa ’74 is a high-quality document of the master still near the peak of his powers. Filmed in concert in Kinshasa Zaire (now known as the Democratic Republic of the Congo), this beautifully-filmed concert movie features lots of close-ups of B.B. King onstage. Unlike many modern concert films, Live in Africa ’74 benefits from the “warmth” of being shot on film. The immediacy of hand-held camera work heightens the intimacy of the performance, a neat trick considering a crowd of 80,000 was present. The excellent liner notes provide important context for the film, and are essential reading. Surprisingly, King was largely unknown in Zaire prior to this concert, so his success there was based on what he delivered onstage rather than delivery of any preconceived notions. The booklet includes a good technical discussion of King’s guitar style, one that won’t put off non-musicians, either. Author Charles Sawyer’s brief notes explain clearly how King’s signature “butterfly” technique took the place of the whammy-bar function in his playing.

The performance is the centerpiece of the film, of course. Even though the band makes extensive use of charts (and is led by a conductor), there’s a very organic and free feeling to the proceedings. King’s economy of style and excellent use of dynamics (plus his winning onstage persona) carry the day. This Shout!Factory archival release is worth viewing for anyone interested in blues, in B.B. King, or in a bit of 1970s history.