So Much for Rockstock 09

I only heard about the Rockstock 09 “festival” a few weeks ago. I was quite excited to discover that the Smithereens would be performing. I’ve always loved their powerpop-meets-heaviness approach, and sort of projected a they’re-kindred-spirits persona onto the band, believing that the quartet was made up of True Fans Of Rock like myself. Turns out I was pretty accurate on that score.

But I had never seen the ‘Reens live, so I was considering it. I visited the festival website and discovered to my delight that The Romantics would also be performing. I had seen the leathery quartet in a club back in their heyday (around ’85, it must have been) and they were fantastic. So that made my attendance even more likely. 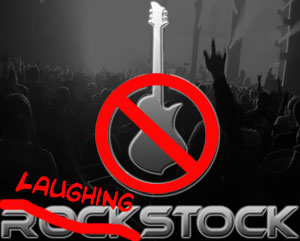 Then I read a bit more. Ewww, I discovered. These two great acts were pretty far down the bill. Near the top were some truly awful acts. Night Ranger? You’ve got to be kidding me. Great White? Oh, dear; the less said, the better. T. Rex? That sounded great, but then since Marc Bolan died in 1977, this was suspect, to say the least.

This Rockstock was shaping up to be the 80s One Hit Wonder tour. Cutting Crew? Naked Eyes? Tommy Tutone? (Well, okay, one great song.) Toad the Wet Sprocket? F**kin-A. Please.

But since the two good (great) acts were both on Saturday, I could pop for a single-day ticket and then leave before Great White did “Sister Christian” or whatever power ballad they inflicted on the world. (Yeah, I know they didn’t do that one. But still.) So I mulled it over a few days.

Then the site offered a special: half-price tickets! So I jumped. I should have been suspicious: why would they drop the price? What about all those people who bought tickets already at full price? (Here’s a hint: there weren’t any!)

So I learned last night from Dennis Diken — drummer for the Smithereens and the man responsible for a great new sort-of-solo album — that the show has been cancelled. I had an interview scheduled with him. Damn.

But perhaps all is not lost.  After I bought my tix, I discovered that the Rockstock shows were only scheduled to be about 30 minutes each. Sort of a showcase approach. So while that would have been good, it wasn’t great.

My schedule has changed of late (I quit the drama-filled band in which I played keyboards and sang lead) so I am free the weekend of the 24th. Turns out that there’s a wonderful lineup of acts performing over three days at something called the Charlotte Pop Festival. The Smithereens are headlining with a full set! And if that weren’t enough (and it damn well is), the rest of the lineup is manna from heaven to a powerpop fanatic such as myself. To wit: The Posies (aka half of Big Star), Mike Viola (the voice of “That Thing You Do!” as well as backup vocalist on the new Marshall Crenshaw album), The Spongetones, The Shazam and Roger Joseph Manning Jr. (of Moog Cookbook and Jellyfish).

My attendance isn’t definite (yet) but I really hope to make it. And if I do, I sincerely hope to bring back several artist interviews. Stay tuned.

Postscript: as of publishing this, there’s still no mention on the Rockstock site that the show’s been cancelled, though it’s being reported in media outlets. A buncha clowns, it would seem.