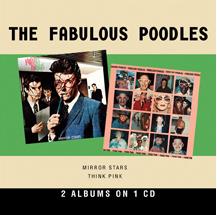 What would the late 70s Kinks have sounded like had they prominently featured mandolin and violin? The simple answer: The Fabulous Poodles. Fronted by a bespectacled Tony deMeur (though he’s known these days as Ronnie Golden), the FabPoos bubbled under in the late 70s with a clutch of winning songs full of sarcasm, whimsy, hooks, wit and muscle. Why the FabPoos never caught on is one of rock’s great mysteries and injustices. As every mention — not that there are many — of the Fabulous Poodles points out, their records sold more in the USA than at home in England, and those Stateside records (1978’s Mirror Stars and 1979’s Think Pink) outsold debut efforts by The Jam and The Clash.

The first American album Mirror Star was a compilation of the group’s first two UK records, and while it contained the excellent title track — and is an overall very well-chosen distillation of 1977’s Fabulous Poodles and 1978’s Unsuitable — it does omit the clever opening tracks from the ’77 debut. Those cuts (“The Ending” and “Doctor”) rank among the finest tracks the band ever recorded. In all, eight or nine FabPoos tracks are absent from this compilation.

But, as Nigel Tufnel might say, “that’s nitpicking, innit?” What remains is a 21-track CD full of some of the best under-heard music from the pub rock/new wave era.

The track “Mirror Star” is a bit more new-wavey than most of the FabPoo’s output, but this rocking tune had “hit” written all over it. Alas, it was not to be, but it remains one of the era’s undiscovered gems. “Work Shy” finds the Fabs in Kinks doppelganger mode; the standard blues changes coupled with trilling mandolin and sawing fiddle evoke memories of the wry, showy Kinks of the early 70s. “Chicago Boxcar (Boston Back)” isn’t only a difficult-to-enunciate phrase (say it three times fast), it’s also a winning pop tune about a haircut that attracts the ladies. A swell harmonica solo adds to the dynamics of the tune.

And on it goes. There are very few clunkers in the collection, and standout tracks abound. The clever (or at its worst, semi-clever) wordplay continues on twisted slice-of-life vignettes like “Anna Rexia” and “Cherchez La Femme.” The group reaches backwards stylistically for the charming “Oh Cheryl,” and in doing so calls to mind some pub-rock cross of Bruce Springsteen and A Tonic for the Troops era Boomtown Rats (which, come to think of, came out a bit after the first Fabulous Poodles recordings).

Like the Kinks before them (and Oasis after them, though without the fraternal punch-ups) The Fabulous Poodles never shied away from their Englishness, and that’s a big part of what made them special. The humor in their music is present throughout; sometimes it’s up front, sometimes subtle, but always a key component of the songs.

Their command of styles was impressive: Ska (“Toytown People”), 50s rockabilly (“Mr. Mike”), 70s boogie (“Roll Your Own”), pub rock (“B Movies”), and much more. The economic arrangements hold plenty of interest thanks to punchy guitar and outside-the-box instrumentation, and the earliest tracks feature eight-string bass by one John Entwistle, producer of a number of FabPoos sides.

If there’s a shortcoming on this set, it’s the total lack of liner notes. A brief survey of the group’s story would have been ideal, but the lack of information is quite disappointing. There’s no mention of the group’s lineup, and no production information is included. The Who‘s bassist produced the UK debut; half of that LP’s tracks make up the Mirror Stars LP, which in turn makes up half of this disc. Muff Winwood (Steve‘s brother, a former member of Spencer Davis Group and a renowned producer and A&R man in his own right) produced most of the others.

The UK vinyl albums are very rare, and the American LPs aren’t easily located either (my vinyl copies — both acquired in the very early 80s — are both stamped “For Promotion Only”, and the now-nonexistent CBS Records can’t have ’em back). An earlier but different compilation His Masters Choice came out on CD in 1995, but it too is rare. So the new American Beat release pairing the two US released by the Fabulous Poodles remains the one to get. It’s a wonderful retrospective of this sadly overlooked and forgotten group from the late 1970s.