Album Review: Cass Elliot / The Road is No Place for a Lady

In 1972 Cass Elliot‘s solo career was in full swing, but she was restless. A switch from ABC/Dunhill to RCA afforded her greater artistic control over her material. She didn’t play an instrument, and she didn’t often compose songs, but she didn’t need to. As an interpreter of the work of others, Cass Elliot had (and has) few peers.

Two of her three RCA albums (plus a few unreleased tracks) have been combined onto a single CD. Cass Elliot and The Road is No Place for a Lady were both originally released in 1972. 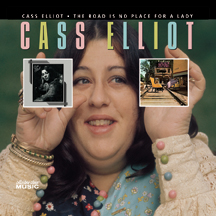 The songs on the self-titled Cass Elliot make clear Cass’ desire to move away from the bubblegum orientation of her (excellent) earlier solo career. The instrumentation on the disc’s opener (Randy Newman‘s “I’ll Be Home”) sounds like a restrained Elton John — with those sweeping yet tasteful Paul Buckmaster arrangements. Cass’ vocals are on a par with — and evoke the memories of — Carole King and Laura Nyro. This and other tracks make a strong case that if Cass would ever get her due, she’d be considered in the pantheon of pop vocal interpretive stylists that includes names like Ronstadt and Midler; names for whom the quality of their pipes and the good taste of their material selection more than offset any perceived deficiencies in other artistic areas (if any).

Her reading of the “Baby I’m Yours” — a 1965 hit for Barbara Lewis — is soulful, swaying and effortless.

Judee Sill‘s “Jesus Was a Cross Maker” has a gospel-pop-country-MOR vibe that woks despite (or along with, depending on one’s viewpoint) the subject matter; she breathes life into the song, and as always, the arrangement is peerless.

“That Song” is a sentimental ditty that is a bit more in line with the material on 1969’s Bubblegum, Lemonade, and…Something for Mama.

“When it Doesn’t Work Out” is a lovely track composed by Elliot’s younger sister Leah Kunkel; the instrumentation is subdued, and Cass’ voice carries the fetching melody. At the end of one particular phrase, she holds a note over several measures, demonstrating the beautiful instrument of her voice. A brief and tasteful sax solo wraps up the piece.

Elliot rescues Bobby Darin‘s 1960 song “I’ll Be There” from obscurity (and from Elvis: he recorded a cover of it two years before Cass).

Her cover of the mid-period Beach Boys semi-hit “Disney Girls” is well-done, but the mawkishness of the lyrics (blame Bruce Johnston, not Brian Wilson for those) makes it the album’s weakest point.

Other than “Baby I’m Yours”, Randy Newman‘s “I Think It’s Gonna Rain Today” is perhaps the most well-known song covered on the album. Underrated wah-wah guitar places the version in its time, but the gospel-chorus vocal tailpiece of the song brings it to a transcendent place. As with all the flourishes on the album, listeners get just a taste, then it’s gone. The surging arrangement at the very end makes the track feel like an album closer. But it’s not.

“Cherries Jubilee” by Marilyn Messina (a backing vocalist on the album) is pleasant enough; its highlight is the (again) brief horn piece in the middle of the song. The track was originally the b-side of the “Baby I’m Yours” single.

Cass Elliot wraps up with a lush MOR reading of “It’s All in the Game”, an oft-covered song originally a hit in the 1950s. The piano solo is in a style likely more appreciated by parents of those buying the album in 1972.

Overall, the album is a well-chosen collection mostly of standards and underappreciated numbers by other composers, with very little filler. While the reissue doesn’t provide a list of personnel (other than daughter Owen Elliot-Kugel‘s recollection of seeing the session sheets: “Wow! It’s quite an impressive list”), apparently some big names took part: famed jazz guitarist Larry Carlton; Venetta Fields (vocalist on Pink Floyd‘s Dark Side of the Moon), John Guerin (former Zappa drummer, later in LA Express), Beach Boys Carl Wilson (vocals) and Bruce Johnston (keys, vocals, songwriting); Carol Kaye (ace bassist of the Wrecking Crew); and Louie Shelton (guitar — that’s him on the terrific solo of The Monkees‘ “Valleri”).

A few rare tracks follow on the 2009 disc. First up, “East of the Sun (and West of the Moon)” is a highly stylized pop tune with a Broadway feel; the song evokes an unavoidable mental picture of an elegant couple dancing: him in tux and tails, her in a slinky cocktail dress. And Cass is swaying gently next to the piano player. Elliot had a real feel for this sort of material, and had the market had any interest for such things in ’72, she could have followed this path in greater depth.

A reading of “We’ll See” by John Sebastian is closer stylistically to Elliot’s work with The Mamas and the Papas (and wouldn’t sound out of place on an LP by Spanky and Our Gang). The brief but enjoyable tune has an old-timey feel that is reinforced by the tasteful tack piano backing. It definitely doesn’t sound like an outtake.

Berry Gordy‘s slinky, bluesy “Try It, Baby” is an anomaly in the context of the other songs on this disc. Yet again we have an example of another direction Elliot could have explored; she delivers the material convincingly. She truly could deliver the goods on a sexy vocal number.

THE ROAD IS NO PLACE FOR A LADY
Elliot’s second RCA album was released mere months after Cass Elliot, and showed her exploring a more contemporary vein. The perceived Elton John connection on the previous album is replaced here by a real one: arrangements on The Road is No Place for a Lady are by Del Newman, who provided similar expertise to Elton’s work around the same time.”(If You’re Gonna) Break Another Heart” is a sweeping pop number on a par with the underrated “It’s Getting Better” from 1969’s Bubblegum… LP. The song is almost over before it starts, though; like all but three tracks on The Road, it’s well under the three-minute mark. Clearly the plan was to get these songs on the radio; sadly this album — like Cass Elliot before it — didn’t chart.

Sweeping is an easily overused descriptor, but a listen to Elliot’s work leaves one speechless. Jim Webb‘s “Saturday Suit” is yet another exquisitely-crafted pop number. Cass’ voice is in its typical fine form, and the peerless arrangement is so good that it would hold up as an instrumental. It’s right up there with the best of early 70s pop.

“Does Anybody Love You” illustrates Cass’ commanding vocal control: when the melody goes up, she’s right on top of it.. The gospel-tinged piano again evokes Elton John. While no detailed personnel info is available, the album was recorded at London’s Trident with British musicians, so…who knows?

“Walk Beside Me” is a pleasant downtempo number, but the wah-wah guitar renders the track more of-its-time than timeless. Still, the vocal chorus makes the song interesting.

“All My Life” is another track (co-)written by Cass’ sister Leah Kunkel. The vocal carries the melody while the instrumentation is understated. The backing builds as the song progresses — a characteristic of a lot of the songs on this disc. The song ends a bit abruptly, though, and seems to leave its potential unrealized, almost as if it were a demo recording. Yet the bass line in particular is reminiscent of Charles Larkey‘s (of The Fugs!) work on Carole King‘s Tapestry, making the lack of musician info all the more frustrating. We do know that Chris Spedding plays guitar on the disc, but there’s not really a lot of guitar on the album.

Paul Williams‘ (remember him?) “Say Hello” gets the Cass treatment. Apparently this is the only instance of this song being recorded by anyone. It’s not among Williams’ most memorable tunes, but it does suggest that Cass could easily have recorded an album’s worth of his material and turned out a good product.

Since it’s contemporary-oriented rather than standards-centric, The Road includes tracks that are sourced from lesser-known composers than those on its predecessor. The piano-based “Who in the World” is one of these. Good, not a high point, over quickly.

“When Love Was Not a Word” features careful double-tracking of Cass’ lead vocal, and a gospel-chorus styled backing. It’s a pretty dated-sounding piece but enjoyable nonetheless.

Norman “Hurricane” Smith — engineer on many Beatles records and producer of several early-mid-period Pink Floyd albums — finds his “Oh Babe, What Would You Say” covered by Cass. Somewhat predictably, the arrangement will be familiar to fans of hits by the New Vaudeville Band, Spanky and Our Gang, and Sopwith Camel. Kitschy but fun. Oddly, Cass’ version was released at around the same time as Smith put out his own version (“Hurricane” got the hit: #3 on Billboard’s pop charts).

The album (and the 2009 twofer disc) wraps up with the title track from The Road is No Place for a Lady, penned by Leah Kunkel. Here, Cass sounds unnervingly like Bette Midler, whose career was just taking off (Midler’s debut LP The Divine Miss M dropped November 1972, mere weeks after The Road hit the streets). This melancholy — yet again too brief — track is a fitting way to end the album.

While Cass would put out a live album in 1973 (Don’t Call Me Mama Anymore), these two 1972 albums (and the bonus tracks) represent the last studio output for this vastly underrated vocalist.