The Beatles 2CD retrospective Anthology 3 was released in 1996, some 17 years after the Beatles broke up. It’s been another 13 years now — a span of time longer than the group was together, in fact a span of time roughly equal to the period between the Beatles appearing on the Ed Sullivan Show (early’ 64) and John Lennon‘s tragic death (December ’80). In other words, a long time; time enough for a lot to change. Time enough for the market, certainly, to change. 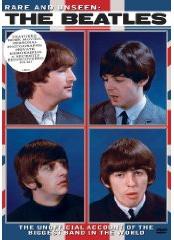 We now know that work began on the Anthology project (then under its working title The Long and Winding Road) as early as 1970. The Beatles and their associates made studious efforts to collect and compile the worthwhile audio and video relevant to the group’s history. Their result was successful, as evidenced by the six CDs of outtakes and ephemera that made up the Anthology audio series; the ten hours of video that make up the Anthology film series (not counting the unreleased-but-circulate-among-collectors “Director’s Cut” versions); and the impressive companion coffee table book.

Yet — yet — since Anthology represents the Beatles’ history from their own viewpoint, holes remain. Other pieces of the puzzle do exist, as does a market for them. When it comes to audio, quite a bit is still out there. Noted Beatles expert (and general rock music authority) Richie Unterberger published a book in 2006 called The Unreleased Beatles: Music and Film, in which he surveyed the landscape of unreleased material. It’s a thick book, well-researched and as exhaustive as could be. And Unterberger knew enough to hedge his bets: he included references to items widely believed to exist, but as yet (or as of 2006) unverified. Even since that time, a couple of items have dribbled out into collectors’ circles (if not into legitimate release). These include audio of a Beatles concert in Montréal Canada; undoctored audio of their legendary Shea Stadium gig; a 1966 show from Memphis TN (the “cherry bomb incident” show) and — most recently — the full eleven-minute-plus version of “Revolution #1” (that’s Take 20 RM 1 for those of you who track such things).

And there are still a number of us waiting for 1967’s “Carnival of Light”, even though it will probably sound like the “Think for Yourself” vocal overdub session tape crossed with John and Yoko‘s Two Virgins. We want it anyway, along with the 23-minute “Helter Skelter” and Ringo’s “Anything.”

Points being, (a) stuff is still being discovered relating to a group that last set foot in a studio together over four decades ago and (b) people still give a damn.

Which brings us to the new DVD The Beatles: Rare and Unseen. This 90 minute DVD purports to include more of that cool stuff. Does it deliver? Well, very strictly speaking, yes. But the brief items included therein most definitely fall into the category of ephemera, and the material is presented in a manner that will doubtless frustrate hardcore Beatle fanatics (and then, for whom else would such a DVD be intended?).

First up is the earliest known footage of the Beatles onstage. Dating from Liverpool in 1962, the color footage is fascinating, and in pretty good quality. But — and this is important — there’s no audio. The clip is very short, and while it’s looped a number of times, it’s presented on the DVD with voiceover narration and commentary, and there’s an audio overlay of that ersatz Merseybeat music. You know the stuff: when you’re doing a piece on the Beatles and you want Beatles music but the budget simply doesn’t allow it, you get some generic “original compositions” that have just the right sonic elements, and you play that instead. It’s understandable, really, and it’s not that bad. But it would have been nicer if the disc’s compilers had included (perhaps as bonus material) the unedited, undubbed, un-voiceovered clip in its entirety. Had they done that, I guarantee some enterprising collector would have synched up some bootleg audio to the clip to create a more-or-less complete document. (Don’t believe me? Then track down and view the unofficial Pink Floyd DVD called 8MM. Case closed.)

Other clips included have the same appeal — while hardcore Beatleologists might know that these clips existed, they likely haven’t seen them before. But all are marred in some fundamental way, and none is presented in its raw, unaltered format. The home movie clips on the sets of Help! and Magical Mystery Tour are fragmentary, but it’s fascinating to see them nonetheless. There’s something about the way the Beatles’ demeanors are captured on these reels that does give the viewer a sense that they’re seeing a previously hidden side of these characters.

The interview clips of John Lennon from the 1970s are interesting — any interview with Lennon is interesting — but the full interview would have been much more so. The true highlight of the DVD is the footage of the Beatles onstage at the Paris Olympia. No, still no audio, but the brief clips show the group at a critical juncture: they had made it way-big in England, hadn’t yet traveled to America, and were onstage in Paris where they got a good-but-not-ecstatic reception. And here the commentary is more than interesting; it’s truly engaging and fascinating. On the bill with the Beatles for the Olympia run were two other acts: Sylvie Vartan and Trini Lopez. The Bulgaria-born Vartan (who was quite the hottie in those days, and scored a number of pop hits on the French charts) reminisces briefly about the shows. As ever, more would have been nice. But Lopez’s drummer — one Mickey Jones — has a lot to say. Jones — now an ubiquitous character actor whose countenance and frame will be familiar to most viewers — filmed the Beatles onstage for posterity, and spent a fair amount of time with the foursome, getting to know them pretty well. His recollections alone make the DVD worth viewing.

Other commentators are included. Some of them — even if they had no direct contact with the Beatles — have something to offer in the way of insight (former Cockney Rebel Steve Harley) and some (even if they do bear a tangential connection) do not (I’m looking at you, Phil Collins). And in at least one instance, the commentary is laughably misguided and factually incorrect. What’s ironic is that the error comes from someone billed as an Official Expert on pop culture.

In sum, The Beatles: Rare and Unseen has its flaws: it was certainly done on the cheap, and if all of the rare gems were strung end to end, you’d have a five-minute film. But those nuggets (and a small but significant portion of the commentary) make this title a must-see (once) for hardcore Beatles fans. Most others, including those with a passing interest in pop music, will still find the DVD interesting if not terribly memorable.