It’s difficult to review a reissue of this disc’s stature. Big Star‘s #1 Record (1972) and Radio City (1973) rank among this reviewer’s desert island discs (I own original vinyl copies bought decades ago), and the critical acclaim these albums received is immeasurable. But of course they didn’t sell a whole lot back in the day. Hurt irreparably by the untimely demise of parent label Stax, the Ardent label release quickly went out of print. 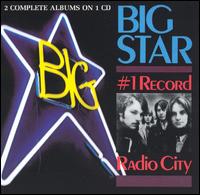 Led by the mercurial Alex Chilton (and on the first album, Chris Bell), Big Star served up Anglophilic (and Anglophonic) rock at a time when to do so was decidedly unfashionable. But Big Star’s take on what came to be known as power pop folded in some Memphis soul stew to create something richer.

Nobody involved with these albums would ever top (or, really even equal) the contents of these albums. As the old saw goes, everybody who bought these albums went on to form their own band. And a lot of those fans became well known in their own rights (the dB’s, REM, etc.)

The sound on the disc is stellar, and slightly louder than the last time the package was reissued. In fact, this reissue is identical to the 1992 reissue, right down to the cover art and track listing. A cursory bit of Photoshopping was necessary to allow the notation of a couple added tracks (yes!), the single mix of “In the Street” (known to general audiences as the theme to That 70s Show) and a single mix of “O My Soul”. Both of these hard-to-find tracks previously turned up mostly on fan-compiled CDRs of Big Star material.

Essential inclusions in the collection of any self-respecting rock fan, #1 Record and Radio City are full of everything that made (and continue to make) rock vital and interesting. If you don’t have these, this new comp is the one to buy (thanks to the mastering and the bonus tracks). Get it, absorb it, and then do us a favor and go start a band.