When I was presented with an opportunity to listen to and review The Complete Liberty Singles by Gary Lewis and the Playboys, I jumped at the chance. I knew Lewis’ hit singles from my childhood and AM radio, and I own a brief best-of (Gary Lewis’ Golden Greats) on vinyl. That disc was filled with good, straight-ahead no-frills 60s pop. A bit on the disposable side, perhaps, but nice, catchy songs and good production with a few subtle flourishes. 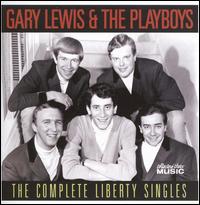 Around 2001 or so I got tickets to an annual concert event in my hometown. An annual fundraiser for the Firefighter’s Association (this is the south so they don’t dare call the union a union), the event always features an oldies-oriented act. That year the bill included the Lovin’ Spoonful and Gary Lewis. I got tickets and went, expecting to see a decent Lovin’ Spoonful and fearing a laughable Gary Lewis. After all, Gary had gotten out of the music biz when he went in the service, and really hadn’t been heard from much since. He didn’t write his own material, wasn’t known primarily as a musician (though he was a competent drummer) and — truth be told — he didn’t have the greatest voice in the history of music.

To my surprise, the concert served up the exact opposite of my expectations. The Lovin’ Spoonful didn’t, of course, include John Sebastian or Zally Yanovsky. They did have Jerry Yester, who was actually in the group for awhile, but is better known in pop circles as one of the prime movers of The Association (and known among lovers of the obscure as part of Henske and Yester, purveyors of the wonderfully bizarre Farewell Aldebaran).

They sucked. They were sooooo bad it was painful. Excellent musicians no doubt, but their onstage shtick and arrangements rendered them a past-middle-aged cover band. Without Sebastian’s vocals, they sounded as much like the Lovin’ Spoonful as Ringo Starr’s All Starr Band sounds like the Beatles. And the All-Starrs usually rock. These guys decidedly did not; their show wouldn’t hold interest during a PBS pledge drive.

But Gary Lewis was terrific. His excellent band supported him well, and the arrangements took the signature lines from the original songs and applied them to guitar leads. They didn’t try to ape the original records’ sounds, but they delivered the spirit thereof served up with rock attitude. And Gary sang just fine.

So back to the new compilation. This 2CD set contains 45 songs (!) and liner notes by Ed Osborne. But in my estimation, the package should not be approached as an album with liner notes. Instead, it’s best appraised as an essay with a companion soundtrack. Osborne’s insightful, unflinching writing gets to the heart of the music. His quotes from producer Snuff Garrett make it clear the producer viewed Lewis as a mere vehicle, and Garrett imposed his vision upon the sessions, dictating what to record and how. And his instincts were largely on the money (literally), seeing as how many hits Lewis had. Quotes from Gary himself leaven the proceedings, and provide a welcome, alternate view of the material.

Did Lewis’ band play on all the songs? No (mumble mumble Wrecking Crew mumble mumble). Did Garrett bring in a vocalist with a similar voice and have him double all of Gary’s parts on the songs? Yes. Did Garrett and Lewis eventually clash over these and other issues? Of course they did. Is The Complete Liberty Singles an enjoyable set? It really is. Props to Collectors Choice for not merely cranking out a cash-in compilation, but instead seizing the opportunity to compile a thoughtful set that contextualizes the music.