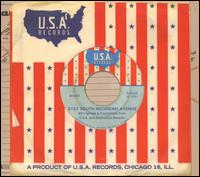 The whole Nuggets thing has finally become something of a cottage industry. The Lenny Kaye-curated 2LP Nuggets set was unleashed on an unsuspecting (and largely disinterested) world in 1972. I bought mine when it was reissued on Sire in the later 70s. Of this album, I posit something that was said of the first Velvet Underground LP, and the first Big Star album, and said with little hyperbole: hardly anybody bought it, but those who did formed groups. Or became rock writers.

A few years later, the Pebbles series dug deeper into the oft-neglected subgenre of garage rock. With the rise of punk in the overall critical eye, people started wondering from where the influence for all that stuff had come. So as new wave took off, (some) people started rediscovering pub rock, glam and other modern rock antecedents.

But Pebbles didn’t really sell all that much, either. As the CD/digital era developed, we saw the end of the megagroups and mega-genres; everything split into narrowcasting. With that, more serious attention was given to these subgenres. Eventually Rhino (who were and remain pretty good at this sort of thing) decided to reissue Nuggets with some hundred bonus tracks. The result was the sprawling and must-have Nuggets box set. The box sold in numbers greater than expected, and thus led in fairly short order to Nuggets II (UK and European artists), Children of Nuggets (mostly 80s “paisley underground” and related material), Left of the Dial (80s/90s college-radio-oriented rock), Loud, Fast and out of Control (50s rock) and No Thanks (punk). More recently the Nuggets canon added Love is the Song We Sing, a survey of San Francisco music from the 60s. And later this summer (’09) will see the release of a Los Angeles-oriented Nuggets box. (Aside: Some years ago I corresponded with one of the compilers of the Nuggets II set; from him I learned that the working-version of the set — passed around for consideration — was some eleven discs. There’s a lot of good stuff out there.)

In the late 90s, subgenre fanatics (or “boffins” as those in the UK would call us) started their own discussion groups on Usenet, Yahoo! and whatnot. One, U-SPACES, discusses garage and psych of the era, and has put together a number of fine fan-compiled retrospectives. (Full disclosure: This writer has had a small hand in some of these and related unofficial volumes.) Demand has only grown that the garage and psych artists and songs of the 60s not be lost to the mists of time. So with that in mind, perhaps it made sense for Sundazed to compile 2131 South Michigan Avenue: 60’s Garage and Psychedelia From U.S.A. and Destination Records.

U.S.A. and Destination were Chicago-based labels that enjoyed some success regionally in those pre “music industry” years; their sole breakout national hit of consequence was “Kind of a Drag” by the Buckinghams. The songs on this set (rendered in glorious back-to-monaural) include cuts by such wonderfully named acts as Gary and the Knight Lites, the Daughters of Eve and Trafalgar Square. Speaking as something of an aficionado of this genre, I have to admit that I previously owned not a single track included on these discs. And I even own the elusive Fading Yellow series!

It’s all here: original songs that shamelessly rip of other acts (“One Girl Man” by The Lost Agency is pure theft from Paul Revere and the Raiders’ “Steppin’ Out”); covers and misguided artistic attempts. But it’s all done with guileless innocence, and without a whiff of the cynicism so endemic to music in the eras that would follow.

The distortion that kicks off “I’ll Make You Pay” by the Shady Daze is shocking to hear, even today; if it doesn’t make you smile, Jack, you’re dead. “Got to Have Your Lovin'” steals from Spencer Davis Group by way of the Chocolate Watch Band. Lord and the Flies’ “Echoes” kicks off with a riff borrowed from the Rascals, then heads off into minor-key territory. The searing “Don’t Want to Cry” by the Buckinghams commits theft upon the Rationals’ “I Want You,” and (somewhat surprisingly) rocks the joint in a manner that would have given that Michigan group a run for its money. “My Girl is Waiting” by Oscar Hamod & the Majestics tosses “Working in a Coal Mine” and “On Broadway” into a musical blender, sets it to fuzz, and hits the button.

Even the covers are fun. The Messengers’ version of “Midnight Hour” sounds like an alternate version of their cover of “(Just Like) Romeo and Juliet”; the latter is vastly more well known thanks to its inclusion on the original Nuggets. The Cryan’ Shames’ demo cover of the Help! track “You’re Gonna Lose that Girl” shows they had real talent. And we can never have enough covers of the Kinks’ “Till the End of the Day” (done here by the aptly-named Trafalgar Square, in case anyone doubted from whence their influences came forth).”

“If You Ever Go” by Ronnie Ross and the Good Guys sounds like the Monkees jamming with the Electric Prunes. And “Soul Finger ” adds lyrics(!) to the Bar-Kays’ hit to create something completely new. Or…as new as garage/psych could be. The Sheffields’ “Do You Still Love Me” predates the country-rock sound, and sounds like nothing so much as a Nesmith-penned Monkees tune. Overall, the set traffics much more in the garage end of the pool, but The Lost Agency’s “Time to Dream” is a credible psych tune, with cheap guitars trying their charming best to sound like sitars.

These bands seemingly existed in a universe where only three or four bands had come before to provide influence: The Rolling Stones, the Yardbirds, the Beatles and the aforementioned Raiders. And when one comes right down to it, you could do a lot worse than build a musical library from those acts and those they influenced. In many ways this music is the missing link between the frat-rock of the early 60s and the heavier sounds unleashed in ’68 and beyond. These groups grabbed on to the rock and roll spirit: that spirit was started in the American Mississippi delta with bluesmen, carried on by Elvis, Little Richard and Jerry Lee Lewis, washed onto the shores of England and then flown back over just in time for the Ed Sullivan Show in 1964 where it went out over the airwaves and into the skulls of these young Midwestern musicians.

The set includes forty songs spread across two discs in a handsome digipak. The liner notes are reasonably well annotated and detailed, but the poster format and tiny type make reading them difficult; a booklet might not have worked in the packaging, but it would have been nicer. A paper slipcase holds the whole thing together.

If you’re looking for original stuff that seems to exist in its own reality, influenced by nothing, then pass this by. But if you appreciate what made rock and pop of the 60s great, you may find 2131 South Michigan Avenue as much of a delight as I did.