The Leigh Glass Band – Even Southern Gothics Get the Blues 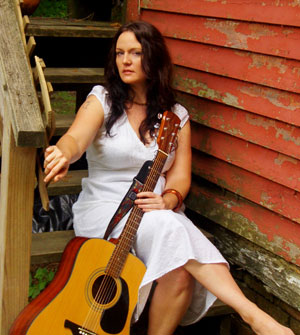 Asheville-based blues troubadour Leigh Glass put the first lineup of her band together in 2003, but her own musical history goes back much farther. “I took piano lessons when I was little…but it didn’t stick,” she laughs. With deep roots in Western North Carolina — her family is from Bethel (Cold Mountain) in Haywood County — she proudly notes her musical pedigree. “My great aunts and uncles and my grandfather were big-time bluegrassers; in the 1940s they played in the Carpenter Family Band, and they performed in Asheville at the venue that was here before the Civic Center was built. For herself, Leigh didn’t pick up the guitar until about ten years ago (“I decided I needed an instrument I could take around with me,” she quips).

Leigh’s original songs are built upon an electric blues musical foundation, with healthy ladles of country (and country-blues) influences added. A list of her musical heroes covers a wide spectrum of American artists and genres: Ann Wilson (rock), Gillian Welch (Americana), Tina Turner (blues and soul), Emmylou Harris (country) and Leontyne Price (opera). Leigh’s style distills all of these and more into the blues idiom, but her lyrics are always prominent in the mix. Leigh offers, “My songs are all stories that run the gamut of emotions and characters.” Though it wasn’t planned this way, Leigh observes that “seven of the new tunes are about men — or told from the viewpoint of male characters! And,” as Leigh notes, “I’m a female.” Yet these are not your standard love-gone-wrong tunes; the lyrics chart more of a Southern Gothic path. Audiences follow her lyrics closely, and onstage Leigh delivers them with gusto: “I tell people, if you sit in the front row, you’re gonna get (accidentally) spit on!”

If you sit in the front row, you’re gonna get spit on! — Leigh Glass

The songs being recorded for the as-yet-untitled follow-up to 2007’s The Saints and the Creole Angel have been road-tested by Leigh and her band over the last six months. Yet, as Leigh explains, “We find ourselves in the studio asking, ‘Wouldn’t it be cool if we added something here?’ and things like that.” Moreover, while Saints was essentially a live-in-the-studio outing that aimed to recreate (as best as can be done in a studio) the band’s onstage sound, on the new disc Leigh plans to bring in “extra instruments that we don’t normally use — banjo, keyboards — because onstage, we’re just a four-piece. We’ll get a little more creative, pull in some local musicians, and see what happens there.” And instead of simply hitting “record” and playing, the Leigh Glass Band is taking time to overdub (lay down some individual instrument and vocal parts one by one) to get things exactly right.

On songwriting: “Several pieces, I’ll have an idea right away,” Leigh reflects. “I’ll say to the band, ‘okay, here’s the vibe, here’s the imagery. Now help me create this.’ Sometimes I might ask (lead guitarist) Dwayne Dodson to play long, sustained notes, or something like that. And for other songs, it’s more like, ‘here’s the basic song; let’s play and see what happens to it.’ I’m open to both approaches, really. It’s all about the organic evolution of the songs.”

In June the band traveled to Nashville for a high-profile showcase gig. July live dates in WNC for the Leigh Glass Band include Jack of the Wood (July 10) and the WNC Ribfest (July 12). And when the album comes out, a CD release party will be scheduled locally. Audio selections from the group’s energetic live show are available at www.leighglassband.com; look there also for updates on the album-in-progress. Current plans call for an August release date.

An edited version of this feature was published in the July 2009 issue of The Laurel of Asheville. 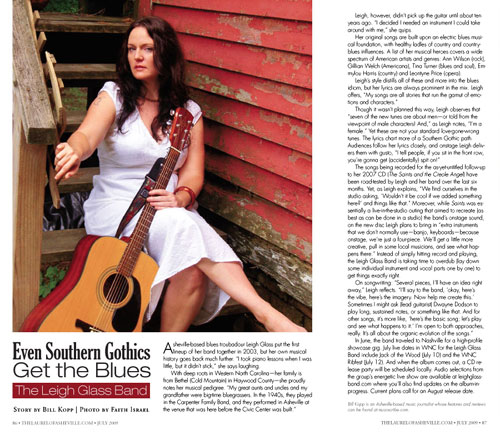