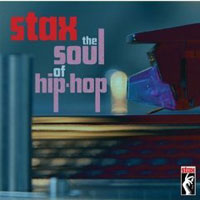 This compilation would have been an inspired, brilliant idea, had it not been done already (see review of the 2008 Blue Note compilation Droppin’ Science). So instead it’s merely a very, very good idea.

Hip-hop is a genre that is largely built on synthesizing earlier works. And one of its virtues is its sense of history, of cultural connectedness. In that, it’s arguably the most self-conscious of musical styles. Put another way, hip-hop’s prime exponents often have impeccable taste in their source material. And those sources aren’t always the most obvious ones, either.

But what makes The Soul of Hip-Hop a successful disc isn’t its historical context, really. It’s the fact that the disc is an eclectic, enjoyable listen. Instead of charting a sort-of Stax Greatest Hits path, it focuses its attention on a wide swath of artists and subgenres, including many lesser-known and/or forgotten tracks. Take Booker T & the MG’s “Meltin’ Pot.” The group is legendary, but this 1971 track isn’t among their better-known recordings. Yet it’s great. The Emotions’ “Blind Alley” (also from 1971) is a great, upbeat tune that foreshadows disco (but in a good way). The disc’s opening track “Ghetto: Misfortune’s Wealth” is described in the liner notes as “dark and mysterious,” and it is that. Odds are you’ve never heard it before.

Being a Stax compilation, the disc includes numbers by Isaac Hayes, the Bar-Kays, David Porter and Rufus Thomas, but there are lesser-known cuts from acts like The Sweet Inspirations (the very depressing sung/spoken number “Why Marry”) and The Dramatics’ cinematic “Get Up and Get Down.”

Tasteful playing and arrangement — always Stax hallmarks — abound. Fourteen tracks of near-random Stax goodness. This is a disc worth owning, and unless you’re a soul aficionado, buying this disc will expose you to a clutch of previously-unheard gems.

Jonathan Kaslow’s excellent liner notes serve (as they should) to place the recordings into some modern context, and to posit the argument that Stax was an important label. The latter is obvious and easily argued, but since Stax was out of business for many years, it’s an argument worth resuscitating for modern audiences.