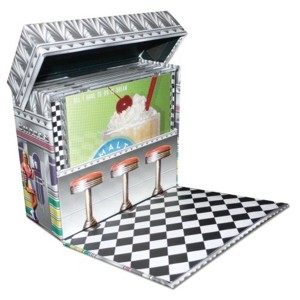 I’ve made a similar point before, but it’s worth saying again: in general Time-Life musical retrospectives haven’t got a long history of credibility. In general they’ve been viewed as cash-ins, as attempts at capitalizing on the fleeting resurgence in popularity of a particular genre, subgenre or craze. So it was against that backdrop that I was forced to consider the recent box set Malt Shop Memories.

It’s in fact a pleasant surprise. A few things stand out about the package:

Nearly all of the music is American in origin. While the sets have ostensibly thematic approaches (“Jukebox Gems”, “Top Down Convertible Sounds”) Malt Shop Memories is not sequenced according to any really discernible theme. It’s certainly not chronological, and it’s not laid out according to subgenres either. Yet there’s a flow to the sequencing. Most of the songs were monster hits, but some lesser hits of great import are included. For example, there’s the Jaynetts’ “Sally Go Round the Roses”, one of the spookiest and oddest pop hits in history.

There’s so much here that it’s hard to cover in a few paragraphs. The eighth disc in the set collects a number of dance-craze tunes (Chubby Checker’s “Limbo Rock”, The Dovells’ “Bristol Stomp”). There’s not a whole lot of real rock and roll on the set, but then there are other comps for that. This is pretty much good-time music from a certain era (or eras), presented in uniformly excellent fidelity. And that’s saying something.

The ninth and tenth discs are something of a “bonus”, as they don’t fall under the Malt Shop Memories banner (though they fit in the box). Dubbed “Street Corner Symphonies” this set did lose my interest, full as they are of doo-woppish material like “The Ten Commandments of Love”. While in the case of box sets more is generally better, here I would have stuck with just eight CDs and 120 or so songs.

Yes, I know that the on-air pitch for this sort of thing always makes the case that the set collects all the hits in one place, saving you lots of money. Fact is, that’s true in this case. As a fan primarily of “album artists” I prefer to hear everything by artists I like, but I can’t imagine a sitting through (let alone purchasing) a whole CD of Rosie & the Originals or The Fleetwoods or the Del-Vikings. In the case of the songs on Malt Shop Memories, this does the trick.

For a rock fan like myself — albeit a fan who appreciates many of the other pop music forms, just to a lesser extent — this is a good addition to the collection, a good way to get these songs in one handy, neat and cute little package. And, the music really is timeless. On a personal note that illustrates that point, for a couple years I led a band that was fronted by three female vocalists. We concentrated on vocal pop from the 1960s, and a surprising number of the songs from our set — songs I didn’t own on record — have found their way onto Malt Shop Memories. It’s fun stuff, music that still has an audience. And for good reason.