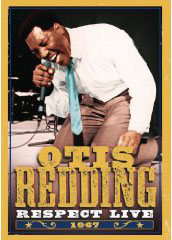 This brief DVD is an effort to collect all extant performance footage of Otis Redding in the months before his untimely death. On that level, it succeeds, more or less. But in doing so, it — by necessity — re-re-recycles material that’s been around for years. Half of the running time consists of Redding’s stellar performance at the Monterey Pop Festival. (Read a story about that festival HERE.) Originally released as Shake — Otis at Monterey (and partially included in the Monterey Pop film — the footage is nonetheless an important piece of history, and exciting viewing.

The remainder of the disc includes footage form the Stax/Volt tour onstage in Norway. And it’s a real gem. Backed by Booker T & the MGs and supported by the Mar-Keys horn section, Redding tears through a half dozen numbers.

It’s fascinating to see the backline: Booker T and the guys have serious amplification courtesy of Jim Marshall. The MGs turn in an excellent rendition of their hit “Green Onions” that’s fiery, blistering. Amusingly, Cropper’s guitar seems to speak “thank you” at the song’s end. Sam and Dave comer onstage for a couple number. Their brilliant “Hold on, I’m Comin'” features stellar support from the Mar-Keys. So much of the disc is given over to the MGs and Sam and Dave that the disc’s title is something of a misnomer, but that’s a minor quibble.

Redding’s cover of the Rolling Stones’ “(I Can’t Get No) Satisfaction” recasts the song — then only a few years old — as a soul number, and it works amazingly well. His “Try a Little Tenderness” builds to a crescendo with the Mar-Keys channeling Herb Alpert, and the number is the the undisputable highlight of the package. Footage shows the military being brought in to keep the peace after the performance.

A visual montage of photo still of Redding is tacked on, with the studio backing of “Dock of the Bay” playing in the background. One fascinating shot included shows Otis with an acoustic guitar.

Even though serious music fans will have seen half of this set before, it still comes highly recommended.