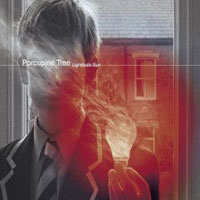 The 2008 reissue of Lightbulb Sun makes one of the rarest parts of the Porcupine Tree catalog readily available again. The group’s seventh album of studio material, Lightbulb Sun was originally released in 2000. Release was originally scheduled for 2007, in fact, as Steven Wilson told me during an interview. Porcupine Tree were selling Lightbulb Sun t-shirts at fall 2007 gigs, since they thought the album would be out by then. No matter. It’s worth the wait. As the latest example of Wilson’s predilection for revisionist history, the new Lightbulb Sun features a pair of bonus tracks and an extra disc, a DVD-A of the entire album, remixed for 5.1 stereo. “For comparison,” as Wilson puts it in the new liner notes, the old mix is included on the DVD-A disc as well.

Being the Luddite-by-economic-necessity that I am, I can’t comment on the DVD-A, as I haven’t any means of playing the 5.1 part of it. But the album itself is quite enjoyable. It represents something of a transitional period in Porcupine Tree’s development, coming on the heels of the mainstream (for PT, anyway) outing that was Stupid Dream. Lightbulb Sun is, like all PT, really, very accessible stuff. In many ways, Porcupine Tree can serve an a listener’s entree into a heretofore unexplored genre: if you’re a rock fan but not so into prog, PT can ease you in gently. If (like me) you’re no metal fan, the band (especially on its later albums) can show you the benefits of that genre without going all Metallica on you.

That said, the harder-rocking side of Wilson and his band isn’t really on prominent display on Lightbulb Sun. With the exception of “Hatesong” which in fact wouldn’t sound out of place on the subsequent Deadwing, the album is built around Steven Wilson’s haunting melodies, evocative lyrics and deft musicianship. Many of the songs feature acoustic guitar as their centerpiece; Lightbulb Sun is, in parts, almost pastoral.

There’s a nod to commerciality, as well: “Four Chords That Made a Million” is a strong track that seems to reach for the charts. The song’s lyrics are an indictment of an unnamed rock act that Wilson (presumably) doesn’t believe deserved their success. (With the modern faux-Indian trappings of the song, this reviewer’s guess is that Kula Shaker is in fact the target of Wilson’s ire. But it’s nothing more than that: a guess.) Another album highlight is “Shesmovedon,” presented here in an early version (the song was released as a bonus track on Deadwing, but sonic differences — if any — are exceedingly minor).

“How is Your Life Today?” evokes memories of The Wall-era Pink Floyd, with its waltzing piano melody and impressionistic lyrics, though the vocal harmonies head more into Beach Boys (or Gentle Giant) territory. The soaring “The Rest Will Flow” is nothing short of majestic; special kudos to the breathtaking string arrangement by Dave Gregory.

Three bonus tracks on the DVD provide more than twenty minutes of previously-unheard Lightbulb Sun-era Porcupine Tree. Like most of the group’s work, these songs make excellent use of dynamics, starting minimally, building to a crescendo, and then receding back again. And like nearly all PT songs, they’re “listening” pieces (though it’s no stretch to imagine a club full of dancers really getting into “Four Chords That Made a Million”).

If Porcupine Tree want to revise their history, reissue difficult-to-find albums (original versions of Lightbulb Sun were changing hands for upwards of $100 prior to the re-release), then more power to them. It was a fine album to begin with; considering all the goodies included, and the superb packaging, it’s an especially welcome addition to the music shelf.