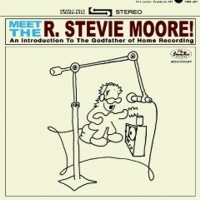 R Stevie Moore is one odd dude. I can’t say whether he’s the sort that listeners would wish to “have a beer with”, but his music is worthwhile for the adventurous.

There’s a whole sub-subgenre of music that sometimes goes by the sobriquet of “incredibly strange music.” (I’m not sure of this, but I think Irwin Chusid came up with the term.) Music that gets lumped into that category includes material by such oddities as Jandek, The Legendary Stardust Cowboy, William Shatner and others. Sometimes it’s the sort of stuff one would’ve heard on Dr. Demento’s program; other times it’s even too weird for that.

Then there’s the whole home-taper/DIY scene. This really took off in the 1980s, with the advent of cassette-based Portastudios (remember those?). These allowed aspiring musicians to realize those songs in their head, using the sound-on-sound techniques that were brought to the world by Les Paul. With home studios, the prolific artists who — for one reason or another (or several reasons) — just wouldn’t or couldn’t play well with others could now build their own teenage symphonies to God in the privacy of their own garret (or whatever).

Which brings us to Mr. Moore of New Jersey USA. Beginning in the 1970s, this son of a popular Nashville studio cat got the recording bug. Briefly signed to a “real” label in 1976, Moore released the legendary-in-some-circles Phonography LP. Critics loved its homespun charm and knowing use of pop music conventions. The songs were based in accessible musical territory, but inevitably took bizarre left turns in their lyrics, instrumentation or arrangements. The album was recorded at home by Moore working alone; this set the pattern for the next 400-plus albums’ worth of material he would release.

No, that’s not a typographical error. With a rate of output that would make Bob Pollard blush, Moore cranked out his singular vision, distributing the fruits of his labors on cassette to members of his R. Stevie Moore Cassette Club. He switched over to CDR in 1999. His music has been championed by those in the know, but his approach (and, one suspects, his demeanor) all but guarantees that mass acceptance will elude him. Assuming he’d even want such a thing.

Now in his mid fifties, Moore follows his singular muse with no concessions to commercial considerations. His market approach is similar to (but more extreme than) that of his nearest counterpart, poet/musician Martin Newell. Newell charted a similar path with homegrown cassette releases, plying his trade of producing winning ear candy for a select audience. But Newell has a reasonably successful career as a poet-in-residence with one of England’s largest newspapers, and tours now and then. Moore is having none of that: live R. Stevie Moore shows are nearly as rare as hens’ teeth.

Even though he looks like a cross between (a) Santa Claus, (b) Roky Erickson and (c) that creepy guy who hangs out at the used record store down the street, Moore’s music is pretty accessible (if decidedly bent) stuff. He has fans in strategic places; on several occasions over the years, various people at certain labels have decided to try and bring his music to the larger audience. Their failure to succeed has little to do with the quality of the music; though inconsistent in quality (how could it not be?) it’s engaging stuff. No, it’s just that Moore follows his ideas down whatever path they take him, whether an epiphany or a musical rabbit hole. So fans looking for an hour’s worth of music in a particular style are bound to be disappointed (they’re always Oasis for that, or if quality’s not an issue, the latest Rolling Stones album).

So in 2008, UK-based label Cherry Red decided it was their turn to try and promote R. Stevie Moore. With assistance from the artist, they compiled Meet The R. Stevie Moore, a collection…a sampler..not quite a best-of…covering Moore’s artistic high point of 1974-1986. Two dozen tracks hit all the bases, and give a fair overview of the man’s peculiar approach to music. Clever titles like “Adult Tree” abound, as do half-formed songs that leave the listener saying, “wow. If he had just stuck with that idea for three minutes, he could’ve had a hit.” But as Moore writes in the seemingly endless liner notes, “I can’t help it. I am happy this way.” Some of the songs are uncomfortably spooky, but most of them are just fun and fascinating.

Find this album. It won’t change your life, but if you want some music that’s challenging and frustrating and catchy and inaccessible and funny and dark and just plain wacky and wonderful, you couldn’t do better than Meet The R. Stevie Moore.