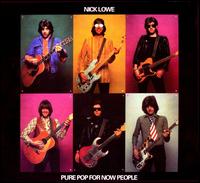 Nick Lowe had a growing (if still somewhat underground) reputation in 1979. As a producer — mostly for Stiff Records — he had worked the boards on stunning a number of high-profile and successful albums, including ones for Graham Parker, The Damned and Elvis Costello. Lowe had already made a name for himself as bassist with pub rockers Brinsley Schwarz, and was playing with Dave Edmunds in Rockpile (due to contractual issues, it would be some years before anything was released under the Rockpile name). He had also done an EP and some solo singles.

In 1978 the busy Lowe finally got around to his own solo album, Jesus of Cool (renamed Pure Pop for Now People for US release, so as not to offend delicate Stateside sensibilities). On Jesus of Cool, Lowe covers a wide array of style, partly to prove he can, but mainly to have a good time. The songs (all written or co-written by Lowe) trade in all the styles he loves, including pub rock (“They Called it Rock”), new wave, bubblegum (“Rollers Show”), faux-reggae (“I Love the Sound of Breaking Glass”), romantic pop (“Tonight”) and many others. A healthy sense of humor pervades the proceedings.

In 2007 Yep Roc relesed a definitive reissue of this flawless album, including all the tracks from both the UK and US versions, and a clutch of bonus tracks, 21 in all. The bonus highlight is an early version of the hit “Cruel to Be Kind.” This album belongs in the collection of every rock fan.