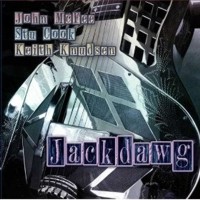 Jackdawg is a heretofore unreleased one-off project from 1990. The group features Stu Cook from Creedence Clearwater Revival, plus John McFee and Keith Knudsen from the Doobie Brothers.

The fifteen songs rock fairly hard in a late 80s/early 90s way. From anyone else, “Bayou Rebel” would be tarred with the too-close-to-CCR tag, but seeing as Stu Cook is involved, they get a pass. Good song, and the chorus harmonies do put some space between Jackdawg and Creedence. “When the Sun Don’t Shine” has bursts of horns that — as likely as not — probably came from a sampler/synthesizer. That’s okay, though: the horn sounds add to the song’s texture. Supposedly “The Men Who Would be King” was inspired by The Beatles, but the song reminds this listener much more of Robert Palmer. “Quicksand” features some especially catchy backing vocals.

The cover of Van Morrison’s “Wild Night” is a highlight of the disc, as is the trio’s rendition of Roky Erickson’s “Cold Night for Alligators.” But the latter’s inclusion raises some questions: it’s seemingly the exact same version included on When the Pyramid Meets the Eye, the Roky tribute. But the thing is, there, the song was credited to Southern Pacific, the band the three were in immediately prior to the Jackdawg project. But that’s just quibbling, one guesses.

With its seemingly-sequenced percussion, “Ghost Dancer” is a bit heavier (and slightly out of place) but interesting. McFee handles lead vocals on this as well as all the other songs, and while he’s got a good voice, it’s not really distinctive enough to make this album super-special; there’s a sameness to his vocals throughout. To be fair, this was a project done with limited financing; the recorded vocal texture might have had greater variety if a bigger budget was available.

Recorded in 1990, the production techniques are modern, but the drum and guitar sounds do peg this release sonically as a product of its era (though the songs themselves are more timeless in their approach). Listeners in 2009 will quickly tire of the gated-reverb effect on Knudsen’s snare drum. But there’s really no reason this album couldn’t have been successful if it was put out in 1990. Fans of that era listened to Dire Straits, Huey Lewis and Bruce Springsteen. Jackdawg could fit comfortably on a playlist with those artists. Jackdawg is still a worthwhile listen.