Album Review: War of Ages — Fire from the Tomb 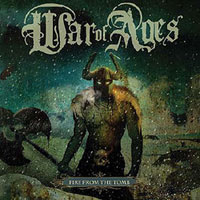 War of Ages’ latest offering, Fire from the Tomb may be the worst thing I have ever heard, and that’s saying a lot (I saw Styx on the Kilroy Was Here tour). Standard-issue metalcore riffs of the “look-ma-how-fast-I-can-play” variety, coupled with a punishing bass/drum assault equal…well, not much. The bowels-of-Hell vocals are a barely-interesting juxtaposition, set as they are against lyrics about how swell their god is. Their god kicks ass, dude. But he (or the band) seems a little…angry.

It’s all the same song, over and over, for twelve tracks (counting the silly, pretentious and obligatory track called “Intro;” hey — props to the guys for that imaginative song title!). The songs all sound the same, and the lyrics never venture beyond the “kickin’ ass for our god” and “bleedin’ in sin” shtick, but at least the titles help us differentiate one track from another. Fun titles include “Brothers in Arms” (about fightin’ for their god), “Only the Strong Survive” (more fightin’), and “Battle On” (are you sensing a pattern here?).

On the positive side, buried in the lunkheaded mix of “The Awakening” (itself a bold lyrical departure: it’s about fightin’ for their god) are some guitars that sound — if only for a moment — like Tom Scholz of Boston.

A liner notes shout-out from the guys in the band says that this album is a re-recording of their first album, necessitated because the first try “didn’t do the album any justice.” I plan on doing it justice by putting it in my trash compactor. Almost any album deserves at least half a star rating. Not this.