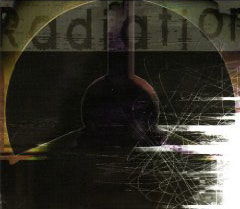 UKZ represents the first recorded work from Eddie Jobson (violin/keyboard with King Crimson, Roxy Music, UK and others) in many years. The debut EP, Radiation is four songs spread out over about twenty minutes. Two with vocals, two instrumentals. In addition to Jobson, the group features Trey Gunn (King Crimson) on “10-string touch guitar” and some other names I don’t recognize. Here are some on-the-fly thoughts on the tracks, written in real time as the disc spun.

Radiation
Doomy and insistent intro with metal influences not totally unlike post-Stupid Dream era Porcupine Tree. Heavily treated vocals, mixed kinda low, but then most people (guys!) don’t turn to this sort of prog for lyrics. The song uses a lick that references King Crimson’s “Larks Tongues in Aspic Pt. 2” and a dark riff that evokes ultra-heavy classic Crimson tracks like “Red” and “Starless.” And then nearly four minutes in, some breaks that remind this listener of Wetton/Downes Drama-era Yes. Not in a bad way, mind you. Cool stereo mixing of drum solos, and then a guitar solo that sounds like an un-credited Steven Wilson (Porcupine Tree again!) guest spot.

Houston
Good sign: the intro guitar sounds like Steven Wilson on his ballad-oriented numbers. Bad sign: the opening lyrical phrase: “Houston, we have a problem.” Not a terribly original idea. The vocals are mixed straight, lacking the previous track’s crypto-“21st Century Schizoid Man” effects. Good stuff so far, but I’m a bit disappointed that we’re ten minutes in without any discernible Jobson violin. Meanwhile, the lyrics aren’t impressing. Nice solo; is it a synth, treated guitar or treated violin? Doesn’t matter — very tasty in any event. The song might have scored more points with me if it was instrumental, keeping that soloing throughout.

Tu-95
Forgive all the Porcupine Tree and King Crimson references, but that’s inescapably what UKZ sounds like. There are certainly worse bands with which to be compared. The first minute of this track sounds like PT extrapolating on a riff from “Red”. Two minutes in, more heavy Opeth-influenced Porcupine Tree stylings, channeling John Wetton’s bass straight out of “Starless” again. This stuff is good, but I fear that if you put five CDs into a changer (King Crimson’s Larks’ Tongues in Aspic and Red, Porcupine Tree’s Fear of a Blank Planet and Deadwing, and UKZ’s Radiation EP), the UKZ music would all but disappear. To be fair, though, those are all stunning albums. Five minutes in, it’s evoking images of Belew/Levin/Bruford/Fripp-era King Crimson. This one is instrumental. Still no discernible violin. Some mid 70s style Frippery. Trey Gunn has been listening to Fripp’s old records. This track is the highlight of the EP.

Legend
Pretty, clean guitar. Unfortunately this track is under two minutes. It could have gone some interesting places.

Definitely worthwhile for fans of any and all of the aforementioned groups (King Crimson, Yes, Opeth, Porcupine Tree) but probably of limited, ho-hum value to anyone else. As for me, I like it fine, especially tracks #1 and 3. I’ve finished with the inaugural listen, and I’m leaving it in to play again. Probably a grower. Points given for the nice artwork; shades of Thrak-era King Crimson (very little surprise there!), and use of the digipak format is always welcome.