Youth at Jazz: Keeping the Jazz Fires Burning in WNC 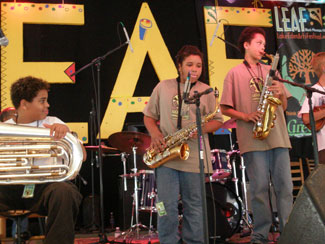 WNC’s long “roots music” tradition is well-known and justifiably celebrated. But there’s a whole lot more going on musically in the region, and much of it has an equally important connection to history. Asheville’s Youth At Jazz program is at the forefront of efforts to link today’s youth to the proud tradition of the American musical art form of jazz.

The Youth At Jazz program had as its genesis the YMI Community Jazz Band. Under the direction of saxophonist/flautist and conductor Gary Bradley, the YMI Band began in 1999 to give Asheville area middle- and high school age musicians the chance–if they worked hard–to perform in front of general audiences. During its eight-year run, the YMI Band performed at several Goombay Festivals; Fiesta Latina; LEAF; events at the Diana Wortham Theatre; Grove Park Inn’s “All That Jazz” festival; and many other events. They got the opportunity to experience the joys (and challenges–see photo) of live performance. Bradley strove to get pay (even if in modest amounts) for the youth, helping the young musicians understand that there’s value to their performances. It’s worth noting, however, that Bradley–whose résumé includes work with Ray Charles, Dolly Parton and James Ingram–contributed his services as bandleader for free. Some of the funds the band raised were set aside for occasional equipment purchases and the major expense of sheet music. 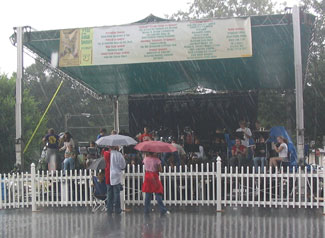 Band membership was in constant flux. Students would graduate or get involved in other endeavors. But new youth were always coming into the group, too, often recommended by music instructors at the Asheville Music School (Bradley is an instructor there as well). The core group of about two dozen generally included a horn section (saxophones, trumpets, trombones etc), strings (variously acoustic or electric bass, violin etc.), winds (clarinets etc.), guitar, drums and a vocalist. [Full disclosure: from 2002-2006 this writer’s daughter Annelise–now away at college–fronted the group on vocals.] Every Saturday Bradley would conduct the band in a several-hour practice; the young group would turn out faithful big-band arrangements of jazz standards. Even with the revolving-door membership, new classics were constantly added to the repertoire. Popular numbers included Ellington’s “Take the ‘A’ Train,” Gillespie’s “A Night in Tunisia” and Johnny Mercer’s “Autumn Leaves,” among many others. Bradley’s arrangements made a point of encouraging ample “solo” time to any player who wanted it. 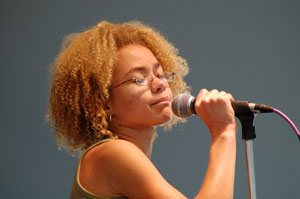 For several years the YMI provided encouragement, gig opportunities, practice space and some financial support to the group. But in 2006, Davidson Jones, parent of one of the players, sought a more structured, stable and financially viable means to promote this jazz endeavor. Securing cooperation from Buncombe County Parks and Recreation, he was able to obtain a yearly lease on the space formerly occupied by the North Asheville Library. Now there’s a permanent practice space to host this new nonprofit organization called Youth At Jazz. Jones even put Gary Bradley on a (modest) salary for his tireless work on behalf of youth (and jazz). Jones is ensuring the success of the YAJ program through soliciting donations and sponsorship, arm-twisting and indefatigable enthusiasm for the Youth At Jazz concept. The organization’s mission includes preservation of the jazz form and building a community of young jazz players that is “inclusive and representative” of WNC. Jones says, “I trust jazz as the right vehicle to prepare youths for successful adult living.”

Membership in the Youth At Jazz band is open to interested youth. For more information on the organization, visit www.youthatjazz.org.